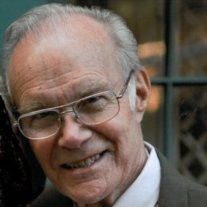 Carol Wade StanleyCarol Wade Stanley, 82 passed away Tuesday, February 26, 2013 in Tulsa, Ok. He was born July 16, 1930 in Tulsa, Ok to Leo Wade & Grace Erma (Cook) Stanley.Graduated in 1948 from Will Rogers High School. He also attended Tulsa Junior College to study liberal arts. But his true passion was drafting, which would become his lifelong vocation. He was “drawing lines” even last week as he had several current projects still underway. Carol started out working in 1948 and held several positions in companies in Tulsa, OK from Douglas Aircraft, Joe Wilkinson Architect, Royal Homes, Oklahoma Fixture Company among others until 1966 when he went to work for himself.He owned Carol Wade Stanley Designs from 1966-2013. He had many award-winning home designs and often had homes featured in the Tulsa Parade of Homes. Many of his designs can be seen throughout Tulsa and Bartlesville and recognized by his signature contemporary designs. Carol’s designs and plans were all hand-drawn works of art, without the aid of a computer.Carol was married for 60 years to the love of his life, the former Marian JoAnne McLemore. They met on a blind date in June 1952 and have been inseparable ever since. They had 3 children, 12 grandchildren and 8 great-grandchildren. He loved his family dearly and was in constant desire for their well-being.Carol was a member of First Christian Church of Owasso – Stone Canyon Campus. He was a faithful servant and loved the Lord since he was just a boy. He was an avid reader and historical buff. A true renaissance man, by his love of classical music and art. In particular, Beethoven, Tchaikovsky and Claude Monet. Frank Lloyd Wright was his hero and inspiration and studied his work all of his life. If you wanted to know something about, FLW, Carol was the one to ask. He was a dedicated bird-watcher and had many “custom” birdhouses in his back yard. He delighted in feeding all of the birds. Carol was a sports fanatic and invested many hours “on the couch” cheering on the Dallas Cowboys, Oklahoma Sooners, Oklahoma State Cowboys and the University of Tulsa. He loved movies, but his favorite movie of all time was A Bridge Over The River Kwai.We will miss you enormously Carol. But, you have left a wonderful legacy to your family which will live on in us.

The family of Carol Wade Stanley created this Life Tributes page to make it easy to share your memories.