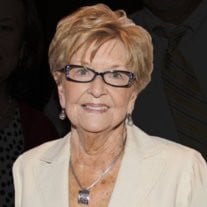 Catherine L. Westbrook, 81, of Tulsa, died Thursday, November 14, 2013. She was born on January 28, 1932, in Bixby, Oklahoma, the daughter of Albert and Pearl McMurray. On January 2, 1953, she married Max J. Westbrook in Hominy, Oklahoma. She loved spending time with her family, especially her grandchildren and great-grandchildren. They were the light of her life and they consider her the best grandma in the world! Catherine also enjoyed doing charity work with her sorority, ESA. She is survived by her children; son, Randy Westbrook, and his wife, Carolyn, of Tulsa, daughter, Debbie Ledterman, and her husband, John, of Tulsa, grandchildren; Jordan Westbrook, Emily Westbrook, Julia Westbrook, Max Westbrook, Lindsey Marten, and Sara Beatt, great-grandchildren, Pierce Catherine Marten and Claire Marten, and her beloved boston terrier, Buster. She was preceded in death by her parents, husband, two brothers, Dean McMurray and Albert McMurray, Jr., and son in law, Don Beatt. A memorial service will be held at 10:00 AM, Wednesday, November 20, 2013 at Southminster Presbyterian Church, 3500 S Peoria Ave, Tulsa, OK. Memorial donations may be made in Catherine’s name to the Tulsa Community Food Bank.

The family of Catherine L. Westbrook created this Life Tributes page to make it easy to share your memories.