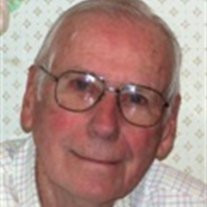 Charley Augustus Burgett Charley was born on March 23, 1920, near Sapulpa, Oklahoma to Charley Watt Burgett and Mary Warren Burgett and went to heaven on December 29, 2013, at the age of 93 in the presence of his family. Charley’s siblings were Alice Pamilee Burgett Rogers, Retha Burgett Childress, Hazel Irene Burgett, Linnia LaVelle Burgett Grandgenett, Carmelita Burgett, Alpha NaDean Burgett Harris, Harold Warren Burgett, and Oneita Joyce Burgett Smith, all of whom predeceased him, except Oneita. He graduated from Bristow High School. To fund his Bristow Junior College education, he drove a Bristow Public School bus when he was 17 years old. Charley then attended the University of Oklahoma to study Electrical Engineering. He lived on Elm Street in Norman, OK, where he met OU student and next-door-neighbor Irene Klapp. He graduated with his Electrical Engineering degree in December, 1941 and often referred to himself as a Pearl Harbor graduate. Irene graduated with her Pharmacy degree, then, Charley and Irene married on Flag Day, June 14, 1942. They celebrated their 69th wedding anniversary in 2011. Irene affectionately called Charley “Kiddo” during their entire married life. Irene passed away on May 1, 2012. Charley worked as an engineer with Westinghouse, in Pittsburgh, PA, where he and Irene lived for about two years. During his employment with Westinghouse, he enlisted in the United States Navy in 1944. The two began their family in Pittsburgh with the birth of son, Charles Robert in February, 1944. Charley and Irene settled in Tulsa, OK, after Charley was honorably discharged from the Navy in March, 1946. He then began his 34 year career with Public Service of Oklahoma. Son John Lawrence was born in February, 1947 followed by daughter Nancy Irene in September, 1948. Upon graduating from Tulsa Public Schools, the three children continued their parents’ tradition by graduating from the University of Oklahoma. Charley had a lifelong love of the outdoors, which led to many big game hunting and fishing trips throughout the USA, including Alaska. He was able to identify plants and trees by their scientific, as well as their common names. He has had OU season football tickets since 1962. In the 1950s he assembled a complete television repair kit and repaired many televisions for friends and family. From the 1950s through the 1970s, he was an avid photographer, documenting many weddings and printing the photographs with his own equipment in a darkroom at home. He built his own gasoline powered lawnmower, canvas boat, laminated water skis, and surfboard. He was a dedicated member and leader at Cincinnati Avenue Christian Church and East Tulsa Christian Church. His heart for missions and church planting was felt across Northeast Oklahoma and throughout the world. He was involved in founding, financing, and voluntarily administering a non-profit day care center in North Tulsa. Later in life, he was a faithful member of Highland Park Christian Church. Charley is survived by his three children, son Charles R. Burgett and wife Sharon K. Spurlock Burgett, son John L. Burgett and wife Nancy E. Traylor Burgett, daughter Nancy Irene Burgett Potts and husband Charles W. Potts. There are five grandchildren and three great grandchildren, David R. Burgett, Michael J. Burgett and wife Dana, John D. Burgett and wife Melissa, their daughter Gentry Mae, Ryan C. Potts, and Levi A. Burgett and wife Betsy, and their children, Laila and Archie. God and family were very important to Charley. His family appreciates and treasures the memories of the many family trips and gatherings. Contributions may be made to Highland Park Christian Church, Tulsa, Ok..

Charley Augustus Burgett Charley was born on March 23, 1920, near Sapulpa, Oklahoma to Charley Watt Burgett and Mary Warren Burgett and went to heaven on December 29, 2013, at the age of 93 in the presence of his family. Charley&#8217;s siblings... View Obituary & Service Information

The family of Charles A. Burgett created this Life Tributes page to make it easy to share your memories.