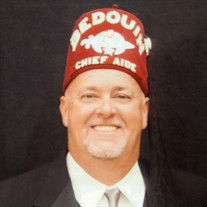 Charles “Stormchaser” Forhan, age 54, passed from this life on Wednesday April 20, 2022 in Tulsa, OK. He was born June 10, 1967 in St Louis, MO to Maurice and Barbara Forhan (Cantrell). He lived his early years in Phoeniz, AZ and later moved to Tulsa, graduating with the Sapulpa class of ’85. He married the love of his life, Susan Foster, on September 2, 2000. Along with his beautiful daughter, Ashley, they made many beautiful memories before they were blessed with their baby boy, Mason Ryan. Charlie was Mason’s biggest fan and loved to watch him play Hilldale football and basketball. You could always find him on or the near field helping and watching him with pride. Mason carried his dad’s number 51 on his jerseys in honor of Charlie’s dirt track racing days. In 2012, Charlie joined the brotherhood of freemasonry where he became member of Masonic Trinity #502 in Muskogee, OK. There he was raised to rank of 32nd degree. In 2014, he proudly became a Shriner at Bedouin Shrine Temple. He took much pride in helping care for the burnt and orthopedic children of the world. He loved being part of the world’s largest philanthropy, the Mighty Mystic Shrine. More than he loved his A1 sauce, he loved his family furiously and took many trips instilling unforgettable memories with his children and grandchildren. He loved to joke and his booming laughter was contagious. Charlie leaves behind to cherish his memories, wife Susan and son Mason of home. Daughter Ashley and son-in-law, Ben Zambalis with their children Adikus, Aidan and Nic of Broken Arrow. Sisters and brother: Leesa Choate and husband Jimmy Dale of Sasakwa, OK, Mary Ruth Forhan of Collinsville, OK and Joseph Kent Forhan of Collinsville, OK. Father-in-law and mother-in-law Gene and Pat Foster of Muskogee, OK. Brother-in-law and sister-in-law Richard and Tina Foster of Muskogee, OK, along with numerous nieces and nephews, extended family and friends. He is preceded in death by his father Maurice Forhan and mother Barbara Spurrier and brother Jimmy Jack Gantt. Donations can be made to the Shriners Hospital for Children at https:lovetotherescue.org Visitation will be held 4:00 PM ~ 6:00 PM, Friday, April 29, 2022, at the Floral Haven Visitation Suites at the Floral Haven Funeral Home. A Celebration of Life Service will be held 11;00, Saturday, April 30, 2022 at the Floral Haven Rose Chapel in Broken Arrow, Oklahoma. For the ones that are unable to attend the service in person, click on the following link to watch the service. https://webcast.funeralvue.com/events/viewer/72967/hash:05AFF32D7D070B30

The family of Charlie Forhan created this Life Tributes page to make it easy to share your memories.

Charles “Stormchaser” Forhan, age 54, passed from this life on...

Send flowers to the Forhan family.