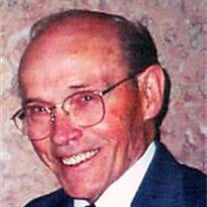 Charles H. Hoye, Jr. Charles Hubert “Bud” Hoye, Jr., 85, long-time resident of Midwest City, Oklahoma, left this life to be with our Holy Father on January 1st, 2012. Bud is survived by his wife of 63 years, Marjorie; son Charles P. “Bud” Hoye, wife Tammy and children Hannah and Harrison of Rockwall, Texas; his daughter Cathy and husband David Dean of Owasso, Oklahoma; sister Amy Lewis of Placentia, California; brother-in-law Dick McTague and wife Dorothy of Overland Park, Kansas; sister-in-law Joann Goodblood and husband Gerry of Shawnee Mission, Kansas; along with many nieces, nephews and dear friends. Bud is preceded in death by his parents, Charles H. and Amy Hoye, Sr., and brothers Max and Bob Hoye.Â  Â Bud was born in Oklahoma City on September 21, 1926. He spent a poor but happy childhood in Oklahoma City until leaving home to join the US Army Air Corps in July 1944 as an Engine Mechanic and was honorably discharged in 1945. It was at this time that Bud met Marjorie McTague, the love of his life, at a downtown roller skating rink. Bud then re-enlisted this time as a Crew Chief for the US Air Force, in November 1945. He served in the Aleutian Islands Air Combat Asiatic-Pacific Theater with responsibility for the maintenance of the P-38 “Lightning” at the base on Attu. Following his second honorable discharge in October 1946, Bud returned home to Oklahoma City and two short years later Bud and Marjorie become one through marriage December 23, 1948, and set up a home together in a tiny house on NW 14th Street. In 1960, Bud and Marjorie and their young growing family moved to Midwest City, which they called home for the next 45 years. Bud was honored with many awards and distinguishments throughout his long career at Tinker Air Force Base in Aircraft Planning and Maintenance, until his retirement in 1984. For many years, Bud was actively involved with Woodmen of the World Life Insurance, both on the fraternal side and as a part-time sales person. His dearest memories were those of the time he and Marjorie spent restoring his classic 1947 Ford V8 Super Deluxe fordor, and their years participating in the Early Ford V8 Club of Oklahoma City, where the couple made close and lasting friendships with so many other Ford aficionados. His favorite pastime was watching (and commenting on) NASCAR and Indy-car racing on television. Due to health concerns, in 2007, Bud and Marjorie moved to Owasso, Oklahoma, to live with their daughter Cathy and her husband David. As their health continued to decline, they moved to Canoe Brook Assisted Living Center in Catoosa, Oklahoma. In his final days, Bud received special care from the Adam Bechtold and the staff at Canoe Brook; caregivers Lola Hettick and her staff; caregivers Libby McCormick and her staff; Omni Medical Care physician Dr. Michael Vu and his assistant Penny; and Christy, Lou and Goldria with Carter Hospice. The family is truly grateful for all the loving care and support provided by each of these special people. A memorial service to commemorate Budâ??s life on this earth will be held in the Chapel at Floral Haven Cemetery, 6500 S, 129th E. Ave, Broken Arrow, Oklahoma, on Saturday, January 7th at 3:00 p.m. Following the service family and friends are invited to join Marjorie and her children to share their memories at Cathyâ??s house, 8103 N. 188th E. Avenue, Owasso, OK. In lieu of flowers, it was Budâ??s wish that he be remembered through donations to the American Lung Association (www.lungusa.org).

The family of Charles Hubert Hoye, Jr. created this Life Tributes page to make it easy to share your memories.