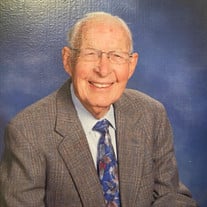 Charles Vaughn Mahaffey went, peacefully in his sleep(as he had hoped) to be with his Lord in Heaven on February 26, 2020. Charlie, to his friends, but Sonny, to is parents as the eldest of the eight children of Mark and Josephine Vaughn Mahaffey, was born on October 26, 1923, in Fort Worth, Texas. Early in his life, Charlie developed his lifelong habits of Christian living, hard work, music and love of family and learning. Upon high school graduation, Charlie attended TCU for 1 ½ years and proudly played his trombone in the Horned Frog marching band. All of his life he loved to sing and, he sang in barbershop quartets and as a song leader at numerous church homes across Texas, New Mexico and Oklahoma. Charlie was a very patriotic American and, after a 1 ½ years at TCU ,he enlisted in the U.S. Army, and served in the 552nd Anti Aircraft Artillery(AAA) Battallion attached to the 78th Infantry Division, having landed on Utah Beach during the D-Day invasion and being one of the first units across the Remagen Bridge in March 1945. Charlie was honorably discharged in December 1945 and immediately entered geology school at the University of Oklahoma where he graduated in 1948. Charlie was a passionate Sooner football fan all of his life. Charlie began his lifelong career as an exploration geologist for Cities Service Oil Co. in West Texas in 1948 where he met the love of his live and wife for 62 years, Alma Bell Henson, at a church youth group meeting in the spring of 1949. Charles and Alma wed on August 27, 1949, and were together 62 years before her death in August 2011. Charlie was the first in his family to obtain a college degree and, he was the roll model for most of his siblings and all five of his children to obtain their college degrees. Charlie nurtured his children to work hard, to finish any job you start and to be the best you can be. As a result, all 5 of his children were outstanding students, and all obtained college degrees, with 2 being lawyers, one a doctor, one a chemical engineer and one a home economist. Charlie and Alma loved to entertain, especially for their friends at church, all of whom looked forward to their dinner parties and bridge parties at their house of 49 years. Charlie’s second profession was a Bixby home farmer where he deployed his certification as a “Master Gardener” in growing a sumptuous array of fruits, vegetables, herbs and pecans. Alma’ s cooking from scratch skills were perfected during harvest when Charlie would cart in crates of produce for Alma to work her magic. Charlie loved to travel. He and his family traveled to almost all of the 48 contiguous states while his children were at home. As empty nesters and after retirement from Cities Service Oil Co. in 1987, Charlie and Alma traveled to most of the continents around the world, and went on numerous cruises, including memorable trips, either with friends or on church mission trips. Charlie’s guiding light in his life was to be a committed, Christian and a role model for his family. He was an active member of Park Plaza/The Park Church of Christ for 49 years. Charlie was an elder for almost 40 years and endowed the eldership with wisdom that will be passed on for generations. Charlie recognized that we are all human, that we all make mistakes, even leaders, but that you should always “err on the side of grace and mercy.” Charlie was also a Sunday school teacher, a song leader, was active in his Care group, was active in mission groups and until recent years, was a staple every Tuesday at the Food Pantry. Charlie remained engaged until the end in the lives of his numerous family members and his church brethren and, he blessed and touched the lives of many people in Tulsa and around the world through his faith and good deeds. Charlie’s best accomplishment and legacy is that all of his children and grand children are Christians. Charles is survived by his 5 children, by his 15 grand children, by his 16 great grand children, and by his brothers, Jon Mahaffey of Azle, Texas, and David M. Mahaffey of Houston, Texas. His children are son, Gregory and his wife Karen of Norman, OK and their children, David, Rosemary and Lucy; son, Robert and his wife Debbie, of Tulsa, OK and their children, Arden, Marietta, Daniel and Nathaniel(Timothy, deceased); daughter, Jann Moore and her husband Walt, of Athens, GA and their children, Beth Prewitt and Stephen Walter; son, Steve and his wife Virginia of Tulsa, OK and their children, Joseph, Jacob and David Charles; and son, Douglas and his wife, Joanne of Newport Beach, CA and their children, Adam, Austin and Haley. Charlie will be missed by his family and friends, but we praise God that he fought the good fight, he kept the faith, and he is now enjoying his heavenly home. Friends may join family members 5-7pm on Friday, 2/28 for a viewing at Floral Haven and for a celebration of Charlie’s life at 3pm on Saturday, 2/29 at The Park Church of Christ. In lieu of flowers, please donate to The Park Church, World Bible School Student,10600 E. 96th St. Tulsa,OK 74133

Charles Vaughn Mahaffey went, peacefully in his sleep(as he had hoped) to be with his Lord in Heaven on February 26, 2020. Charlie, to his friends, but Sonny, to is parents as the eldest of the eight children of Mark and Josephine Vaughn Mahaffey,... View Obituary & Service Information

The family of Charles Vaughn Mahaffey created this Life Tributes page to make it easy to share your memories.

Charles Vaughn Mahaffey went, peacefully in his sleep(as he had...

Send flowers to the Mahaffey family.