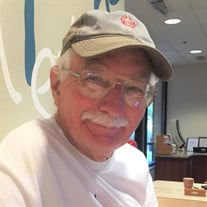 Charles "Pete" Herman Rowland, 79 of Broken Arrow, Oklahoma went home to be with Jesus on Monday, July 27, 2020 in a Tulsa hospital with his wife and children by his side. He was born on July 25, 1941 in Lancaster, Ohio to his parents, Herman Neville Rowland and Genevieve Frances Harris Rowland. He married the love of his life, Nancy Louada Begley, on October 6, 1962 in Tulsa, Oklahoma. They shared over 57 wonderful years together. Pete strove to show the selfless love of his Savior, Jesus Christ, to every person he met. Cars and music were his passions. As a part of Christian Outreach Racers Evangelism (CORE) Ministry, he combined two of his greatest joys by sharing his faith in Jesus with those he met at the drag races. He also participated in other ministries, including Junior Achievement, Walk to Emmaus, Chrysalis, House Church Hospitality, and men's Bible study. Pete was a father and grandfather to many, some by blood and others by choice. It was often said he was born to be a grandpa because he was not ashamed to show his childlike side. His children, grandchildren, nieces, and nephews were the joy of his life. He frequently participated in their antics and watched cartoons such as Rocky and Bullwinkle and Spongebob Squarepants by their side. Pete is survived by his loving wife, Nancy Rowland of Broken Arrow, Oklahoma; his daughter, Robin Major, and her husband Tom of Keller, Texas; his son, Chuck Rowland, and his wife Dianna of Broken Arrow, Oklahoma; his five grandchildren: Tyler Rowland and his wife Katie of Broken Arrow, Oklahoma; Ryan Major and his wife Sarah of Oklahoma City, Oklahoma; Kyle Major and his wife Miranda of Oklahoma City, Oklahoma; Braden Rowland of Broken Arrow, Oklahoma; and Emelyn Whittington and her husband Alex of Oklahoma City, Oklahoma; one niece, Lisa Hoffman, and her husband Ken of Dayton, Ohio; his great-grandchildren Corban, Hadassah, Devan, and Lenorah Major and Miles Whittington; grand-nieces and nephews Katie, Maddie, Michael, and Julianna Hoffman; and many friends and extended family members. He was preceded in death by his parents, Herman and Genevieve Rowland, and one sister, Judy Booth. Pete's celebration of life memorial service will be held at 3:00 p.m. on Monday, August 3, 2020 at Floral Haven Funeral Home Chapel. In lieu of flowers, please consider donating to CORE Ministry by PayPal at [email protected] or by check at the following address: CORE Ministry 9482 E. 500 Rd. Claremore, OK 74019 ***Services will be live streamed starting at 2:45 p.m. on 8/3/2020. To view the service live, please click on the following link: http://webcast.funeralvue.com/events/viewer/34000. ***Masks are required if you plan to attend the service in person.

Charles "Pete" Herman Rowland, 79 of Broken Arrow, Oklahoma went home to be with Jesus on Monday, July 27, 2020 in a Tulsa hospital with his wife and children by his side. He was born on July 25, 1941 in Lancaster, Ohio to his parents, Herman... View Obituary & Service Information

The family of Charles "Pete" Rowland created this Life Tributes page to make it easy to share your memories.

Send flowers to the Rowland family.