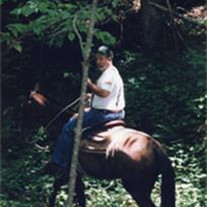 Charles Dwayne â??Chuckâ? Spencer April 8, 1946 – March 2, 2012Chuck was born April 8, 1946 to Charles Junior and Pearl (Hutson) Spencer, at St. Johnâ??s Hospital, Tulsa, Oklahoma.Â  He attended Tulsa Public Schools graduating from Will Rogers High School in 1964.Â  After graduating high school, Chuck entered the United States Air Force (USAF) serving his Country proudly for four (4) years, being stationed in Alaska and Germany.Â  After returning from the service he was employed by American Airlines until retirement.Â  Â Chuck was a man of many interests and hobbies. No matter what he became involved in, he always jumped in with both feet and went full throttle to learn and accomplish his goals.Â  In his younger years he spent many hours hunting & fishing with his Dad, and twin brother Wayne, and continued to do so teaching his son, Wes.Â Â  If Chuck was outdoors he was happy.Â Â  Â Chuck was a modern day Cowboy, loving the freedom of living in the country, spending many hours learning to ride, train, and traveling to shows with his cutting horses winning many ribbons, and trophies. He had an infectious belly laugh, a great sense of humor, a huge smile, loved a good practical joke, and never met a stranger.Â  He loved riding his motorcycle with best friend John McGuire and making memories on the open road.Â  However, his latest adventure was raising Border collies, and competing in herding competitions, but also learning to play the guitar.Â  Chuck was a man of God and at times was known to preach a sermon or two.Â  Â Chuck leaves behind one son Charles Wesley [email protected] Spencer and wife Kristen, One grandson, Charles Hayden Spencer, his twin brother, Charles Wayne Spencer, as well as older brother, Jim and two sisters, Saundra and Joyce. Chuck came from a large family including many Aunts, Uncles, cousins, nieces, nephews, as well as many good friends he considered to be family.Â  Chuck touched, and was a part of many lives. He will be missed by All that knew him, but his memory will remain forever.Â Celebration of Life Service will be 12:30 pm Wednesday March 7th, Floral Haven Funeral Home Chapel, Broken Arrow.

The family of Charles DeWayne Spencer created this Life Tributes page to make it easy to share your memories.