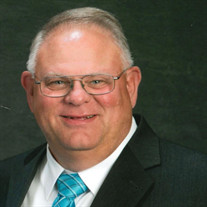 Charles William “Butch” Thompson of Broken Arrow, died December 31, 2020. Butch obtained an MBA from Northeastern State University, and held a certification as a CPA. Butch had worked for several local manufacturing companies in the Tulsa area, retiring in 2019 from US Pioneer. He was a faithful member of Eastland Baptist Church since 1975, where he had served in various capacities including treasurer, teacher, and Men’s Prayer meeting leader. He was very involved with the music and drama ministries there, and was best known for his portrayal of Ebenezer Scrooge, in the Christmas programs. He sang in multiple groups over the years, but most enjoyed playing his trumpet in the church orchestra. Butch met his wife Elaine at Eastland Baptist Church while serving as the church treasurer, and she the church secretary. They were married in 1977, and have two children Charles “James” Thompson and Elisabeth “Liz” Thompson. Butch first became a grandfather in 2003, and enjoyed spending time with his five grandchildren, the most recent born in November. Butch was a hard worker, working two jobs at times to help provide for his family. When he retired, he was able to fulfil a lifelong dream of traveling through the Yukon to Alaska, towing a camper. He and Elaine spent 3 months fishing and camping in some remote areas of the North American Continent. He enjoyed fishing, especially with his brothers Mike and Pete. He was always looking to take someone with him every weekend to either the lake or the river to fish, some of whom had never fished before. Charles William “Butch” Thompson is preceded in death by his mother Mildred Louise Watts. He is survived by his wife Elaine Thompson; son Charles “James”; daughter Elisabeth “Liz” Thompson; grandchildren: Payton, Olyvia, Corbyn, Amilya and Calley Thompson; father Ernest Clinton Watts; Brothers Michael Thompson, Pete Thompson, Mike Watts, and Tim Watts; and countless other friends. Funeral Service will be 11:00 AM, Thursday, January 7, 2021 at Eastland Baptist Church. In lieu of flowers donations can be made to the Missions Fund at Eastland Baptist Church. http://eastlandbaptist.org/

The family of Charles William Thompson created this Life Tributes page to make it easy to share your memories.

Send flowers to the Thompson family.