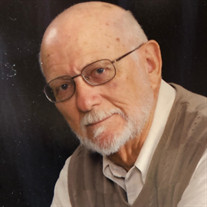 Chelsea C. Cook was born in Marysville, California, on December 21, 1936 to Preston and Lillie B. Cook. Despite being told he would not walk again after contracting polio as a child, Chelsea not only walked, but marched through much of the rest of his life. He played Tuba at Henryetta High School, where he is remembered by band-mates as the smallest kid in the band carrying the largest instrument. Chelsea continued his music studies at the University of Oklahoma before graduating from Central State College, now University of Central Oklahoma, where he also received a Masters in Music Education. He taught at several Oklahoma schools before becoming the band director at Wewoka High School, a job he held from 1966 to 1979. He is remembered for his tough standards and devotion to students. Chelsea taught grade school for three more years in Wewoka before moving into administration and finished his education career as a principal at Henryetta Junior High. During his early career, Chelsea packed up the family and headed out for a year long teaching adventure in Australia, which the kids remember chiefly as the place where they lived on the beach and where their car broke down dependably. During his “retirement” Chelsea did missionary work and became editor of the Henryetta Free-Lance, where he wrote a column called “And Furthermore”, which continued to be carried in several Oklahoma papers until just a few years before his death. Throughout his life Chelsea was a prolific volunteer - church choir director, international mission planner, Tulsa Airport Ambassador, and book manager/Santa Clause at the Salvation Army Store in Broken Arrow. Chelsea discovered bee-keeping in his seventh decade of life, a passion he enjoyed sharing with anybody who was interested and even some who weren’t. Chelsea and his wife Carol, who was by his side for 60 years, managed to squeeze in trips to Europe, China, and Latin America. On a couple of cruises, they took the whole family, which includes his son Christopher and wife Jenifer, daughter Cari and husband Ronnie Smith, and son Jeremy and wife Jonene. They have nine grand-children and six great-grand-children who all call Chelsea “Pop”. He is remembered as a most devoted husband, father, grandfather, great-grandfather and friend, planner of projects, compulsive collector/hoarder, optimist, irascible Scotsman, lover of children, and as a man who defeated the odds to stay on his feet and as the poet says, “fill every unforgiving minute with sixty seconds’ worth of distance run”. ​Feros Ferio, Pop. We will miss you.

Chelsea C. Cook was born in Marysville, California, on December 21, 1936 to Preston and Lillie B. Cook. Despite being told he would not walk again after contracting polio as a child, Chelsea not only walked, but marched through much of the... View Obituary & Service Information

The family of Chelsea C. Cook created this Life Tributes page to make it easy to share your memories.

Chelsea C. Cook was born in Marysville, California, on December...