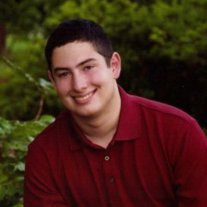 Christian Patrick Dehart, 22, died September 27, 2013. He was born in Dallas, Texas on December 6, 1990, the son of Gary and Tish Dehart. Christian attended Union Public Schools, where he graduated in May, 2009. He was active in the Union AFJROTC for four years, participating in numerous Armed Drill Team Exhibitions, the Bataan Memorial Death March Marathon, and represented the state of Oklahoma in the 2009 Presidential Inaugural Parade in Washington, D.C. He was a member of the Church of St. Benedict.Immediately following high school, Christian joined the U.S. Army, completing Basic Training at Ft. Sill, Oklahoma and Advanced Training at Ft. Sam Houston, Texas. He trained as a Combat Medic with the 469th Medical Company of the Army Reserve. He recently completed deployment to Camp Buehring, Kuwait. Christian was a registered EMT and attended Oklahoma State University for one year.Christian possessed a wonderful, quirky sense of humor that was appreciated by his wide range of friends and family. He was kind to all, extremely loyal and compassionate to anyone in need. He had an unshakeable inner strength, old-school toughness and kept close counsel. Always there for his friends, he was known as a good listener and advisor to many. He enjoyed life through his family, friends, music and adventure. Christian loved deeply and knew that he was loved in return.Christian is survived by his parents, Gary and Tish Dehart of Broken Arrow; brother Connor Dehart of Broken Arrow; paternal grandmother Marie Dehart of Vinita; maternal grandmother Ernestine Luzania of Broken Arrow; longtime girlfriend Christiana Isaacs of Norman; as well as several aunts, uncles, cousins and extended family members. He is preceded in death by his paternal grandfather Ollie Wayne Dehart of Vinita and maternal grandfather Ernest Luzania of Carmichael, California.A rosary will be held on Thursday, October 3, 6:30 pm at the Floral Haven Chapel in Broken Arrow; Family will be available for visitation from 5:30-6:30 pm. A funeral mass will be held on Friday, October 4, 11:00 am, at the Church of St. Benedict in Broken Arrow; Interment will follow immediately at Floral Haven. Christian’s family wishes to invite all guests to a reception at the Floral Haven Family Center, following the interment.

Christian Patrick Dehart, 22, died September 27, 2013. He was born in Dallas, Texas on December 6, 1990, the son of Gary and Tish Dehart. Christian attended Union Public Schools, where he graduated in May, 2009. He was active in the Union... View Obituary & Service Information

The family of Christian Patrick Dehart created this Life Tributes page to make it easy to share your memories.