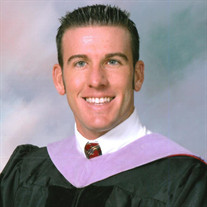 Dr. Christopher Ryan Mastin was born in Tulsa to Patsy and Rick Mastin and passed from this life on March 19, 2022. He grew up in Tulsa, graduating from Jenks High School in 1993, and early on cultivated his passion for racing – jet skis and motocross mostly. During high school and college, Chris won the Tulsa Shootout, was ranked in the Top 20 of Novice and Experts on the Budweiser Jet Sports National Tour and competed in the IJSBA World Finals. That passion expanded to include flying and earning his private pilot’s license. Chris attended the University of Oklahoma, earning a Bachelor’s in Business Administration in 1998 and his Doctorate of Dental Surgery in 2003. He knew early on that he enjoyed the challenge of medicine and dentistry and planned to become an oral surgeon. Chris completed a one-year residency at Los Angeles County Hospital and then was accepted into the Oral Surgery program at the University of Southern California After graduating in 2008, he returned to Tulsa to begin his private practice. In addition to his practice, Chris was on staff at Saint Francis and St. John Hospitals and his exceptional skills and training as an oral surgeon, as well as his unparalleled commitment to each patient, were well known and respected by other medical professionals. He quickly became the one to call for complex and challenging trauma cases, sometimes resulting in facial reconstruction. Chris was a member of the American Academy of Oral and Maxillofacial Surgeons, the American Dental Association and Component Societies and the Anesthesia Committee for the Oklahoma Board of Dentistry. Additionally, he served on the Executive Committee and the House of Delegates for the Tulsa County Dental Society and regularly volunteered for Eastern Oklahoma Donated Dental Services. Chris had an abundance of extraordinary skills and talents – perfectionist, precise, smart, competitive, disciplined, dedicated, persistent, compassionate – that all contributed to his success as a father, an oral surgeon and a human being. However, the most important quality Chris had was a huge heart. He didn’t just take care of his patients, he took care of his employees, friends, close family members as well as extended members. Chris loved nothing more than the six years he spent coaching Ryan’s lacrosse team and being Riley’s biggest cheer fan! Chris was a devoted son and brother, a loving husband, a loyal friend and boss, and a proud and grateful father. He will be tremendously missed by all who were fortunate to know him, especially his wife, Jennifer; his two children, Ryan and Riley, his parents, Patsy and Rick, and his brother, Richard. Because his children are his greatest legacy and education was incredibly important to Chris, an education fund has been established with Cole Kidwell at Edward Jones for the benefit of Ryan and Riley Mastin. To contribute to the fund, please call 918-477-7787. Visitation will be 4-6 pm, Tuesday, March 29, 2022, at Floral Haven Funeral Home Chapel The funeral service will be 10:00 am, Wednesday, March 30, 2022, at Floral Haven Funeral Home Chapel To view the service via webcasting, use the link provided below: http://webcast.funeralvue.com/events/viewer/71532/hash:AA0DAF2D9592B4D5

Dr. Christopher Ryan Mastin was born in Tulsa to Patsy and Rick Mastin and passed from this life on March 19, 2022. He grew up in Tulsa, graduating from Jenks High School in 1993, and early on cultivated his passion for racing &#8211; jet skis... View Obituary & Service Information

The family of Dr. Christopher Ryan Mastin created this Life Tributes page to make it easy to share your memories.

Dr. Christopher Ryan Mastin was born in Tulsa to Patsy and Rick...

Send flowers to the Mastin family.