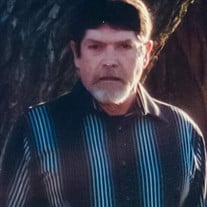 Clarence William Gregory Jr, better known as “Bear”, passed away on December 12, 2020, at the age of 60, at his home in Mounds, Oklahoma, with his loved ones by his side. He was born in Muskogee, Oklahoma on February 2, 1960 to Ruby Hester and Clarence Gregory Sr. Bear was a hard worker, who retired from the Tulsa Fairgrounds after spending nearly 30 years as a mechanic and plumber there. He loved to work on cars and would often be talked into helping friends and family members when they had mechanical problems. Bear was preceded in death by his stepfather Jerry; his stepmother Barbara; his brothers Calvin, Stanley, and Mark; his daughter Misty; and his grandchildren Isaiah and Melissa. He is survived by his mother Ruby; his father Clarence Sr; his wife Penny; his sisters Linda, Tammy, and Joan; his son Corey; his daughter Lisa “Hobo Bill”; his grandchildren Janessa, Torey, Marcus, Ellisa, Sammy, Jordan, Tyler, Hailie, Bailie, Ruby, and Bella; and his great grandchildren Jordan, Nolan, and Evayiah. Visitation will be held from 2-6pm on Monday, December 21st, and a graveside service will be held at 3pm on Tuesday, December 22nd, both at Floral Haven in Broken Arrow, Oklahoma.

The family of Clarence William Gregory Jr. created this Life Tributes page to make it easy to share your memories.

Send flowers to the Gregory family.