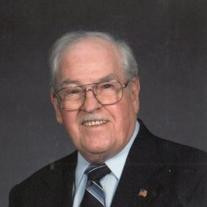 Clarence M. NationClarence Madden Nation, husband, father, deacon, salesman, and gospel singer, died Wednesday in Tulsa. He was 88.A native of Haileyville, OK, Clarence was the youngest of six children whose father was a police chief who lost his life in the line of duty when Clarence was five. He was raised by his widowed mother during the Great Depression, and lived for a time in California before returning to Oklahoma.He served in the U.S. Army with the 4th Division in the landing at Utah Beach in Normandy on D-Day. He was awarded a Bronze Star for heroism and the Purple Heart for wounds received in the Hedgerow fighting, and carried shrapnel in his shoulder the rest of his life. He returned to the front and fought in the Hurtgen Forest in Belgium, but was evacuated because of a shell concussion. He was in Paris at warâ??s end.It was in Seminole, OK where he met and married Mary, the love of his life and began his family.His joys were being actively involved in church work, singing in church choirs, with quartets, and at revivals with Mary playing the piano.Moving to Tulsa in 1962, he was active at Ranch Acres Baptist Church and worked with his brother at Freight Damage Co. He later worked for Curtis-Goodner Van Restaurant Supply and retired. He then worked with Spess Pontiac in Cleveland, OK before retiring again.In his later years he resided with Mary at the Broadmoor Retirement Community in Tulsa. He served as an active deacon at First Baptist Church, and sang in the choir.He was also a 32nd Degree Mason, was involved with Gideonâ??s International and was a volunteer counselor for the Tulsa Ostomy Association. He also served for many years as an election judge at local polling places.Clarence was preceded in death by his wife, Mary, and two grandchildren â?? Annabeth and Lydia Nation.Survivors include three sons and their families: Larry and Jennifer Nation, Broken Arrow; Garry and Linda Nation, College Station, Texas; and Noel and Amy Nation, Cleveland, OK. He was grandfather to ten grandchildren and six great-grandchildren.Services are 3 p.m. Saturday at Floral Haven Chapel.

Clarence M. NationClarence Madden Nation, husband, father, deacon, salesman, and gospel singer, died Wednesday in Tulsa. He was 88.A native of Haileyville, OK, Clarence was the youngest of six children whose father was a police chief who lost... View Obituary & Service Information

The family of Clarence Madden Nation created this Life Tributes page to make it easy to share your memories.