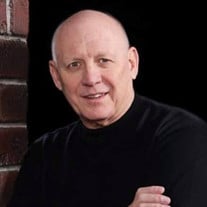 Clay William Allen, Jr., age 76, of Broken Arrow, OK, went to be with his Lord on December 30, 2020, after a brief struggle with COVID. Clay was born in Goldsboro, North Carolina on February 29, 1944 to Clay William Allen and Naomi Sanders Allen. He met the love of his life, Marilyn Kathleen (Mary Kay) Pogue when he was 17 years old at a high school basketball game, and they were married on March 21, 1964. Clay was a Certified Professional Photographer, and received his Craftsman Degree from the Professional Photographers of America. He proudly served as the president of the Professional Photographers of Oklahoma and the Southwestern Photographers Association. One of the highlights of his career was being awarded the Kodak National Gallery Award for his photo “Mining Monument” in 1997 by PPA. Clay, also had a successful, and much sought after photography business as Clay Allen Photography. He spent decades photographing celebrations of life events for numerous families throughout Oklahoma. These events included photographing little league teams, family portraits, Senior and Graduation portraits, and many weddings. He completed a Bachelor of Science Degree in Photojournalism from Oklahoma State University in 1966, and began his career in Photojournalism with the Examiner Enterprise in Bartlesville, OK. That career would span his lifetime. In 1969, he began working for Oklahoma State University – Okmulgee, as a Technical Writer in the Public Information Department. He went on to create a degreed Photography Program at OSU Okmulgee, and began to teach what would become hundreds of Photography Students. Former students describe him as a passionate teacher with a kind, loving spirit, who loved what he did for a living. He was known to tell his students, “Choose a job you love, and you will never work a day in your life”. After 34 ½ years with Oklahoma State University, he retired. He and Mary Kay had moved to Broken Arrow, OK. Tulsa Technology Center approached him to assist with a vacancy in their photography department. He accepted and spent the next 14 years, providing area high school students with his knowledge and love of photography. He loved his time at TTC and the friendships developed. He retired in 2018. During this same timeframe, he never left his Photojournalism background. He worked “part-time”, in addition to his fulltime job, covering Okmulgee High School Sports for the Okmulgee Daily Times from 1969-1999, and then he covered Coweta High School sports from 2005 until his death. He loved his Bulldogs and Tigers! Oklahoma High School sports was one of his life’s passions. He particularly enjoyed seeing future successes, both on and off the field, from the students he covered as they became adults. He kept in contact with many of these athletes for the remainder of his life. He especially found great joy in photographing his grandchildren as they pursued their passions whether in lacrosse, dance, track, cross-country, or showing animals for the FFA. Clay Allen also served as a volunteer with Vocational Industrial Clubs of America, now known as Skills USA. He was their Chief Photographer at National Conferences for 47 years. He looked forward to these National Conferences each year, and really enjoyed all the events and people he had the privilege of photographing. Clay was a follower of Jesus Christ, and was very active in Church Leadership roles at Town and Country Christian Church in Okmulgee, and Cedar Ridge Christian Church in Broken Arrow. He also served on the Board of Directors, for many years, of the Cookson Hills children’s home in Northeast Oklahoma. Clay Allen was preceded in death by his parents, Clay and Naomi Allen (Mahan), his step-father Wayne Mahan, and his sister Janice Stewart. Clay is survived by his beloved wife of 56 years, Mary Kay Allen, his daughter, Melissa Adam, son-in-law Todd Adam, grandson Taylor Adam, and granddaughter Kayleigh Adam; he is also survived by his son, Scott Allen, daughter-in-law, Jennie Allen, granddaughter Madeline Allen, and grandson, Ryne Allen. He is also survived by numerous nieces and nephews, all of whom he adored. There will be a memorial service held at Cedar Ridge Christian Church in Broken Arrow, OK on Saturday, January 9, 2020 at 1:00PM. This service will also be streamed online from Cedar Ridge’s website: cedarridge.church In lieu of flowers, memorials may be made to the Cookson Hills children’s home at cooksonhills.org.

Clay William Allen, Jr., age 76, of Broken Arrow, OK, went to be with his Lord on December 30, 2020, after a brief struggle with COVID. Clay was born in Goldsboro, North Carolina on February 29, 1944 to Clay William Allen and Naomi Sanders... View Obituary & Service Information

The family of Clay Allen created this Life Tributes page to make it easy to share your memories.