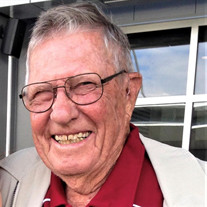 Clifford "Harold" Miller, 97, of Tulsa, Oklahoma passed from this life on Wednesday, September 23, 2020, in a Tulsa hospital with family by his side. He was born March 26, 1923, in Drumright, Oklahoma to Cecil Roy Miller and Alice Beatrice... View Obituary & Service Information

The family of Harold Miller created this Life Tributes page to make it easy to share your memories.

Send flowers to the Miller family.