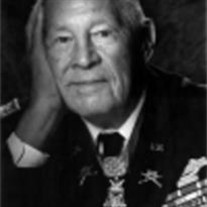 Lt. Col. Ernest Childers, 87, the first Native American to receive the Congressional Medal of Honor in World War II, died on March 17, 2005, in Tulsa, Oklahoma, after a long illness. He was the son of Ellis B. Childers, who served as an Attorney for the Creek Nation, serving in the Creek House of Lords in Indian Territory, and Tina Starks-Childers. He was the grandson of Napoleon B. Childers, who was an Indian Territory Judge. Col. Childers was born in Broken Arrow, Oklahoma, on February 1, 1918 and was the middle of five children. The family lived in town during the winter, to allow the children to attend school and on a farm in the summer. His father died when he was young, and the family moved to the farm permanently. Ernest’s hunting skills provided much of the family food and contributed to his being a marksman in the Army. Col. Childers enlisted in the Oklahoma National Guard in 1937 to earn extra money while attending the Chilocco Indian School. He transferred from Chilocco to Ft. Sill for basic training and was deployed to Africa in World War II. His first invasion point with the United States Army was in Sicily. It was on September 22, 1943, in Oliveto, Italy, that 2nd Lt. Childers, despite a fractured instep, causing him to have to crawl forward, advanced on and took enemy machine gun nests, killing two snipers on the way, and captured an enemy mortar observer. Due to his heroic efforts, his crucial actions allowed the American troops to successfully advance and win the Battle of Oliveto. In recognition of his historical action, he was awarded the Congressional Medal of Honor. After the war, Col. Childers continued to pursue a career in the Army. He served in Austria, Georgia, California, Panama, Oklahoma, Korea, Kansas and Alaska before retiring at Ft. Sill in August of 1965. Col. Childers has been recognized with numerous honors during his military career and lifetime. He is the recipient of the Combat Infantry Badge; Europe and Africa Campaign Medal; the Purple Heart; the American Defense Service Medal; American Campaign Medal; WWII Victory Medal; Army of Occupation Medal; the Bronze Star; the Italian Cross of Valor; the National Defense Medal and the Oklahoma Distinguished Service Cross, as well as three overseas bars. He was the honored guest of President Franklin D. Roosevelt at the White House. He attended the Eisenhower Inauguration, the Kennedy Inauguration, the Nixon Inauguration, the Carter Inauguration, the Reagan Inauguration, the Bush Inauguration, and the Clinton Inauguration. He was honored in 1966 by the Tulsa Chapter of the Council of American Indians as Oklahoma’s Most Outstanding Indian. The Ernest Childers Middle School was dedicated in Broken Arrow in 1985 and on September 24, 1994, and a statue of Col. Childers, by famed American Indian Artist and sculpture Allan Houser, was dedicated in Broken Arrow’s Veterans Field Of Honor. Childers is survived by his wife, Yolanda, and three children, Elaine, Donna and Ernie. Services will be at the Childers Middle School, 301 E. Tucson, Broken Arrow, 2:00 P.M., March 24, 2005. Public viewing will be on Sunday, March 20, 1:00 to 9:00 P.M., and Monday through Wednesday, March 20-23, 2005, 9:00 A.M. to 9:00 P.M., at Floral Haven Funeral Home, 6500 S. 129th East Avenue, Broken Arrow, Oklahoma. Col. Childers will be entombed in a crypt at the Veterans Field of Honor at Floral Haven, near the Freedom Shrine and Medal of Honor Court, that he and fellow Medal of Honor recipients assisted in dedicating in 1979. His Medal of Honor Citation, cast in bronze, is part of the tribute on permanent display.Survived By: his wife, Yolanda, and three children, Elaine, Donna and Ernie

Lt. Col. Ernest Childers, 87, the first Native American to receive the Congressional Medal of Honor in World War II, died on March 17, 2005, in Tulsa, Oklahoma, after a long illness. He was the son of Ellis B. Childers, who served as an Attorney... View Obituary & Service Information

The family of Lt. Col Ernest Childers created this Life Tributes page to make it easy to share your memories.