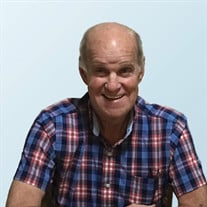 Curtis Dean Phillips of Tulsa, Oklahoma passed away on September 25, 2020, at Saint Francis hospital, at the age of 77 years, 2 months and 18 days. Curtis was born July 1, 1943 in Anderson, Missouri, to U.V. and Carol Phillips. He was the third of five children in the Phillips clan. They moved to Miami, Oklahoma in his early teen years. He attended Miami High School, where he played football and met his future wife, Ann Marie Hanna. Curtis graduated in 1961 and in December, 1962, he and Ann were married, spending almost 55 years together before she passed in Oct. 2017. In 1963 they had their first daughter and in 1964, they moved to Tulsa when Curtis started working for Bill White Chevrolet as an auto body repair man. A second daughter was born in 1966. Curtis worked at many dealerships in Tulsa through the years and soon developed a following in the industry because of his quality work. He loved attending local races and painted several race cars and helmets over the years for owners and drivers. Curtis also enjoyed hunting, camping, four-wheeling, and watching football. His main hobby, though, was his family. He loved his grandkids, great-grandkids and visiting with the whole family on Sunday Fun Day. His granddaughter Tiffany wrote this about him: “Our sweet Papa. I miss you. Your plaid shirts and blue jeans and tennis shoes. Your smile. The way you rolled your eyes and huffed when one of us was worried about you. The thing I will miss the absolute most is watching our babies with you. That’s how I will remember you. A lap full of your great-grand babies. Reading books, singing songs, having tea parties. Until we see you again, we’ll be loving you.” Curtis was preceded in death by his parents, brothers Eddie Phillips and Jackie Phillips, and his wife Ann. He is survived by his daughters, Patricia Cook and husband Eddie, and Teresa Haynie and husband Shawn. Grandchildren Evan Cook (Rhi), Tara Near (Justin), Anna Hall (Sebastian), and Tiffany Hall (Joey), and great-grand children Carson, Ryne, Presley, Everett, Taylee, Zoey, Trinity & Stetson. Sisters Carolyn Blankenship and Donna Benson (John), sister-in-law Pat Burkhardt (Bill) and brother-in-law John Hanna (Debbie) and many nieces and nephews, friends and relatives. A graveside service will be held on Wednesday, October 7th at 10:00 AM at Floral Haven Memorial Gardens, Garden of Faith.

Curtis Dean Phillips of Tulsa, Oklahoma passed away on September 25, 2020, at Saint Francis hospital, at the age of 77 years, 2 months and 18 days. Curtis was born July 1, 1943 in Anderson, Missouri, to U.V. and Carol Phillips. He was the... View Obituary & Service Information

The family of Curtis Dean Phillips created this Life Tributes page to make it easy to share your memories.

Curtis Dean Phillips of Tulsa, Oklahoma passed away on September...

Send flowers to the Phillips family.