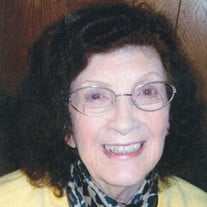 Deirdre Kathy Lintell of Tulsa, Ok, one-month shy of 90, passed away at 7:50 a.m. Sunday, September 6, 2020 at University Village. She was born October 8, 1930, in Clonmel, County Tipperary, Ireland to John and Mary Josephine Keating O’Brien. In 1953 Deirdre married Michael Lintell in Epping District, England. His work as Flight Lieutenant R.A.F and Engineer brought them to many parts of the world, including Germany, Iran until the 1979 Revolution, back to England, then to Tulsa, OK about 1980. Michael preceded her in death in 2003. On April 16, 2008 Kathy proudly became a citizen of the United States. Deirdre is survived by two sons: Christopher in the Channel Islands and Nicholas in Queensland, Australia. Her younger sister, Nola Mihhlkin of England, also survives. Deirdre studied Nursing in London, and on May 1, 1953 was admitted as a “Registered Nurse” for England and Wales. She received a Certificate of Training in Sewing and Tailoring in February 1991 from Tulsa County Area Vocational Technical School, and subsequently spent many hours at her sewing machine. Being a lover of books, she was an avid reader. She studied Latin in school, and got along well in Gaelic, English, French, German, and learned some Farsi in their 4-1/2 years in Iran. People found her an interesting conversationalist. She was confident in sharing her thoughts and points of view. With her lovely Irish accent, Kathy, as she was known by many, could be charming and a real delight to visit with over tea and scones. Gratitude goes out to University Village Retirement Community, to Transitions Life Care Hospice who cared for her during her last months, to Joyce Roling who was her POA and Care Giver the last seven years, and to Floral Haven Cemetery for the arrangements. A private memorial service will be held at Trinity Episcopal Church in downtown Tulsa, when her ashes are interred there at Good Shepherd Columbarium. In lieu of flowers, memorials may be made to Trinity Episcopal Church, 501 S Cincinnati Ave, Tulsa, OK 74103.

The family of Deirdre Kathleen Lintell created this Life Tributes page to make it easy to share your memories.

Send flowers to the Lintell family.