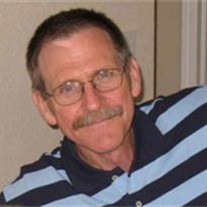 HOPPER- Dan., 52, of Broken Arrow, was born September 8, 1954 to John Hopper and Virginia Powell. He graduated from Stroud High School in 1972 and attended Central Vo-Tech, Oklahoma State University as well as University of Nebraska at Omaha. He had a love for music and was a DJ at KMOD and the KATT in Oklahoma City. He married the love of his life, Denise Owen of Norman, Ok on May 1, 1981. Together they had two children whom he adored, Whitney Danielle, 22, and John Ethan Leo, 17. He worked for Williams for over twenty years. He was a simple man whose life was his family. He could fix anything and loved computers. He loved the Lord, and always strived to protect his witness to others. He was a firm believer that you should treat others as you would like to be treated. He was a fighter who beat three rounds of cancer. His family would like to thank everyone at Cancer Treatment Centers of America that loved and cared for him during his battle. Dan was currently employed with Willbros USA Engineers and words cannot adequately express the family’s thanks and gratitude for the outpouring of love and prayers, and the many hours of vacation time that was donated to sustain him during this battle. Dan was continually amazed by how much the Willbros family did for him. Dan and his family attend New Creation Church and feel blessed to be a part of that family and wish to thank everyone for their loving care and prayers. Service was held Tuesday, March 13, 2007, at Floral Haven Funeral Home Chapel at 12:30. In lieu of flowers donations may be made to the Dan Hopper Educational Trust Fund at any of twelve Spirit Bank locations, as well as Oral Roberts University Missions.Survived By: his wife Denise; their two children Whitney and Ethan of the home, mother Virginia Powell of Chandler, Ok, father John Hopper and his wife Doris Hopper of Perkins, Ok, sister Rebecca Hopper of Edmond, Ok, in-laws Larry and Pat Owen of Norman, Ok, ten nephews and one niece, as well as many other family members scattered throughout the country.

HOPPER- Dan., 52, of Broken Arrow, was born September 8, 1954 to John Hopper and Virginia Powell. He graduated from Stroud High School in 1972 and attended Central Vo-Tech, Oklahoma State University as well as University of Nebraska at Omaha.... View Obituary & Service Information

The family of Dan Hopper created this Life Tributes page to make it easy to share your memories.