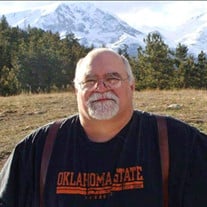 Daniel “Danny” Howard Cline, Jr., 64 of Broken Arrow, Oklahoma passed from this life on Monday, June 7, 2021 at his home. He was born October 13, 1956 in Oklahoma City, Oklahoma to his parents, Daniel Howard Cline, Sr. and Barbara Ann Alspaugh Cline. He married the love of his life, Patricia “Patti” Lynn Guilfoyle on October 17, 1986 in Eureka Springs, Arkansas, and they have shared in over 34 wonderful years together. Danny is survived by his loving wife, Patti Cline of the home; three children, Blake Cline and his wife Heather of Bixby, Oklahoma, Andrea Parrish and her husband Alan of Broken Arrow, Oklahoma and Darren Cline and his wife Christi of Broken Arrow, Oklahoma; sixteen grandchildren, Tanner, Zac, Cheyenne, Chloe, Derek, Aden, Ray, Kassidy, Kayla, Jaxon, Zoey, Lincoln, Caeden, Colin, Coleton and Elsie; two sisters, Rene Redmond of Bartlesville, Oklahoma and Stacey Smith of Ketchum, Oklahoma; and many friends and extended family members. He was preceded in death by his parents, Daniel Cline, Sr. and Barbara Johns. He worked at Pacesetter Claims Services and enjoyed traveling the country with his extended work "family" before a brain injury forced him into early retirement in 2012. Danny loved the outdoors, was happiest with a fishing rod, sitting next to the water, with the birds chirping nearby. He was an amazing family man, and leaves behind a legacy of what it means to be a husband a father, that anyone could be proud of. His infectious smile and desire to make anyone he came into contact with laugh, and feel at home will be greatly missed by all that knew him. A rosary service will be held at 6:00 p.m. on Thursday, June 17, 2021 at St. Anne’s Catholic Church in Broken Arrow, Oklahoma. A memorial mass will be held at 11:00 a.m. on Friday, June 18, 2021 at St. Anne’s Catholic Church. In lieu of flowers, memorials may be made to the American Diabetes Association by going to www.diabetes.org and click on donate now or to the American Cancer Society by going to https://donate3.cancer.org/

The family of Daniel "Danny" Cline created this Life Tributes page to make it easy to share your memories.

Send flowers to the Cline family.