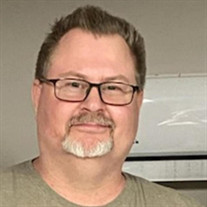 Daniel Joseph Dodenbier died December 31, 2021, at his home in Broken Arrow, Oklahoma. Dan was born January 18, 1968, in St. George, Utah. Danny lived in Las Vegas until September 1972, then moved to Bunkerville, Nevada with his family. He was the 8th child of Joseph and Betty Dodenbier’s twelve children. He loved Bunkerville and it will always be home to him. Danny loved water and could be found wherever a source was: the tub, the pool, the lake and especially the Virgin River & Bunkerville falls where he spent as much time as possible during the summer. Danny was the perfect picture of a little Dutch boy. As a child he had blonde curly hair that his mom had a hard time cutting the first time. In 1977 Danny became ill and was life flighted to Salt Lake City where he began his lifelong struggle with seizures. Danny’s mom expressed her gratitude to a loving Heavenly Father for extending his life at that time. Dan was always kind and caring to the elderly. He loved them and they in turn returned that love to him. Danny attended school at Virgin Valley High School. He loved his high school years. He assisted Mr. Glen Crowther with the special needs classes and found joy helping those students. He graduated in 1986. He then served a mission in the Texas Dallas Mission. After his mission he met the love of his life, Laura Hansen, through their mutual friend, Lynne Yocom. They were married October 13,1990 in Lehi, Utah. They settled in Pleasant Grove, Utah and began their family. They had two sons- Sean Daniel and Braden Ronald. They loved the mountains of Utah and enjoyed spending time there. Dan and his father-in-law, Leland, enjoyed each other’s company and could be found sitting and sharing memories in front of the big picture window. When the room went quiet, you could find them both snoring in the big side chairs. He helped his dad, Joe, doing odd jobs and loved to work with his hands. In 2010 they moved their family to Broken Arrow, Oklahoma where they now reside. Dan was always involved with his boys and spent many hours with them. Dan loved playing video games with them and was their friend as well as their dad. His favorite sports team was the Utah Jazz and he was an avid fan. He spent time watching old TV shows and movies. He loved his collection of lighters and pocket watches. He enjoyed cooking and shared recipes with his sisters when he would do his weekly phone check on his mom in the last years of her life. Dan is survived by his wife, Laura; and their sons, Sean and Braden; his siblings, Diana (Bryce) Frehner, Donna (Bevan) Reber, Denise (Ray) Whittier, Darryll (Janet) Dodenbier, Darlene (Mike) Lister, Dina Bowers, Daphne (Scott) Storie, Deborah (Karl) Mulitalo, Dale Dodenbier; his in-laws, Leland Hansen, Gary (Vickey) Hansen, Dennis (Michelle) Hansen, Trudy (Mike) Nielsen. He has numerous nieces and nephews. Dan was proceeded in death by his parents, Joseph and Betty; siblings BettyJo and David; mother and father-in-law, Leland and Betty Hansen; his brothers- in-law, Doug Bowers and Ronald Hansen; and his sister-in law Connie Williams. “Sometimes the pain is too much, and I shed a tear or two. But I remember what sacrifice will bring in a year or two. Leaning on belief, seeing demons in my sleep, But I’m waking every sunrise pulling wisdom from the deep. Found comfort in the darkness an angel amongst the heartless, Cloaked in a slight smile, consoling my ‘right now’. Cause I’ve seen the future. I felt it press against my lips. Least I can do is give heaven back its kiss.” By J.S. Memorial service will be announced at a later date. Interment will be in the Bunkerville Cemetery.

Daniel Joseph Dodenbier died December 31, 2021, at his home in Broken Arrow, Oklahoma. Dan was born January 18, 1968, in St. George, Utah. Danny lived in Las Vegas until September 1972, then moved to Bunkerville, Nevada with his family. He... View Obituary & Service Information

The family of Daniel Joseph Dodenbier created this Life Tributes page to make it easy to share your memories.

Send flowers to the Dodenbier family.