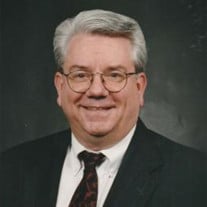 Darrel Ray Miner, 75, of Tulsa, OK, passed away Sunday, June 27, 2021 in Tulsa after a year-long battle with cancer. Darrel was born June 22, 1946 in Independence, KS to parents Forrest and Mary Miner (Clover). While growing up, he lived on a farm 2 miles west of Sycamore, KS and attended a one-room school house (Lone Elm) for grades 1 thru 8. As a bright young lad he finished that school a year early because he completed the work of 2nd and 3rd grades during one school year. He attended high schools in Neodesha, Cherryvale and graduated from Independence High School in 1963. Darrel married his girlfriend from Cherryvale, KS, Nancy Sue Clark on Nov 8, 1963. Between 1964 and 1966 a son and a daughter were born. As a teenager Darrel suffered a serious injury that broke his back in 3 places, which caused some problems the rest of his life. During this time of surgeries and rehabilitation, Darrel decided to accept Jesus as his Lord and Savior and was baptized into Christ. In 1966, Darrel graduated from Independence Community College with straight A’s. At 20 years old, he moved his young family to Lawrence, KS, to attend Kansas University where he earned a B.S. in Pharmacy in 1969 and became a Registered Pharmacist (RPh) in Kansas (later in 2001 he was grandfathered in to be a DPH – Doctor of Pharmacy in Oklahoma). Along the way two more sons were born in 1967 and 1971. Darrel was the Director of Pharmacy at the Labette County Medical Center in Parsons, KS, for 7 years. He was zealously involved in evangelistic church work in Parsons and Cherryvale, leading several people to Christ. He graduated from a 2-year preaching school in Elk City, OK, and graduated from the Garnett Road Academy of Christian Education in Tulsa. In Nov. 1977, Darrel moved his family from Cherryvale, KS, to Tulsa, OK, and was a Staff Pharmacist at St. John Medical Center in Tulsa for nearly 40 years. Darrel and Nancy were divorced in 1981. In the early 1980’s Darrel set a goal for himself to run in the Tulsa Run (9.3 miles). He trained, managed his back pain, and successfully ran the Tulsa Run three years in a row. In the summer of 1985, Darrel met Linda L. Walker and they were married on Oct 4, 1987. Darrel and Linda were involved at the Garnett Church of Christ across 30 years working with the Singles Ministry, where Darrel was the self-appointed minister of hugging. They touched the lives of many souls as they facilitated Divorce Recovery and Grief Recovery groups both at Garnett and the Downtown Bixby Church of Christ, where they were long-time members. Darrel served as a pharmacist on two medical missions to Guyana in 1998 & 1999, with Linda joining him on the 2nd trip. Darrel’s main hobby was genealogy; to him it was a treasure hunt. He was passionate and doggedly persistent in locating information about the many relatives and forefathers tracing back to the early 1600’s. He and Linda traveled to Pike County, Ohio and located the graves of his great-great-grandfather Miner and great-great-great-grandfather Miner. They also traveled to Stonington, CT and found the burial site of LT Thomas Minor, the first Miner/Minor immigrant, born in 1608. Darrel was preceded in death by his parents. He is survived by his beloved wife, Linda, of nearly 34 years; his only brother Thomas O. Miner; 3 sons: Robert Dwane, Gary Ray and Jeffrey Todd Miner; 1 daughter, Donna Sue Miner; 12 grandchildren, 8 great grandchildren, many nephews and nieces. The family acknowledges and appreciates the Supportive Care Solutions and Miller Hospice, Dr. Timothy Holder and staff. In lieu of flowers, donations in memory of Darrel Miner may be made to Sunset International Bible Institute, New Mexico Christian Children’s Home, or In Search of the Lord’s Way. Visitation will be held on Saturday, July 3 from 10 am - 6 pm at Floral Haven Funeral Home with family present from 4 pm - 6 pm. Services will be at 11 am on Monday, July 5 at the Bixby Church of Christ.

Darrel Ray Miner, 75, of Tulsa, OK, passed away Sunday, June 27, 2021 in Tulsa after a year-long battle with cancer. Darrel was born June 22, 1946 in Independence, KS to parents Forrest and Mary Miner (Clover). While growing up, he lived on... View Obituary & Service Information

The family of Darrel Miner created this Life Tributes page to make it easy to share your memories.

Send flowers to the Miner family.