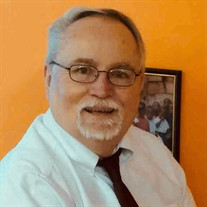 David Lee Armstrong, 64, of Broken Arrow, OK, passed away on June 15, 2021, after a valiant battle with COVID-19. David was born on March 4, 1957, in Monmouth, Illinois. After graduating from Warren High school in 1975, he went on to join the U.S. Army serving at Ft. Dix, New Jersey. After his time in the Army, David returned to Illinois. He later lived in Georgia before making Oklahoma his home. In his retirement years, David returned to school, earning both a Bachelor’s and Master’s degrees in Theology becoming an ordained minister. David put family first, always, and was a dedicated husband to Linda and father to Jason, Christina, and Dylan. His family meant more to him than anything else in the world, something he often mentioned. He was unendingly proud of his family and always tried his best to support them. David was a passionate basketball fan cheering for his beloved Oklahoma City Thunder. He also could often be found sharing his Christian faith at local nursing homes and volunteering with the Broken Arrow school district when he wasn’t at home. David was a member of the Carbondale Assembly of God Church. Anyone who knew David knew that he was the most loving husband, father, and grandfather a family could ask for. David was predeceased by his father, Frank Armstrong. He is survived by his wife Linda Armstrong (Estes) of Broken Arrow, OK; his mother Elsie Rice (Meredith) of Albany, GA; his sisters Carol (Chauncey) Elliott of Broken Arrow, OK; Starr (Jerry) Benton of Albany, GA; and Robin Armstrong of Albany, GA; his brother Jack (Laura) Armstrong of Monmouth, IL; his half-brothers Rodney Strahlman and Robert Strahlman; his children, Jason (Toni) Armstrong of Leesburg, GA; Christina (Donnie) Tucker of Sylvester, GA, and Dylan Armstrong of Broken Arrow, OK; his grandchildren Brooke Williams (Armstrong) and Kristian Hall; many beloved nieces and nephews, and one special friend Kathy Easter. A funeral service to celebrate David’s life will be Monday, June 21st, at 10 a.m. at Floral Haven Funeral Home in Broken Arrow, OK. Viewing will begin at 9 a.m. Interment will immediately follow at Park Grove Cemetery. A dinner will follow interment at Carbondale Assembly of God Church. In lieu of flowers, the family asks for donations to be made in David’s honor to the National Multiple Sclerosis Society (https://mssociety.donordrive.com/campaign/In-Memoriam-of-David-Armstrong) or your local animal shelter. Follow the link for webcasting services: View Funeral Webcast

David Lee Armstrong, 64, of Broken Arrow, OK, passed away on June 15, 2021, after a valiant battle with COVID-19. David was born on March 4, 1957, in Monmouth, Illinois. After graduating from Warren High school in 1975, he went on to join the... View Obituary & Service Information

The family of David Armstrong created this Life Tributes page to make it easy to share your memories.

Send flowers to the Armstrong family.