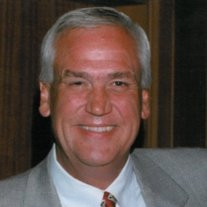 David Clark Jackson was born on December 30th, 1947, to William Clark and Mary Magdalene (Raterman) Jackson. He passed away on November 3rd, 2013, surrounded by family and friends.In 1967, David left Nathan Hale High school and listed in the United States Marine Corps. He was wounded during the TET offensive in the Battle of Hue City on March 2, 1968. David earned two Purple Hearts during his service career. David and Johnna attended a battalion reunion in Norfolk, VA, where he was able to participate in the dedication of the USS Hue City.In 1969, David met his soul mate, Johnna (Coventon) Jackson. They were married on August 1st, 1970. David was a mechanic at Spraker Volkswagen for 4 years, where he adopted their two feline children Fat Boy and O.D. Johnna encouraged David to pursue his GED and ultimately he received his BSME from the University of Tulsa. Immediately after graduation, David and Johnna moved to Indiana where he had a position on an Indy car racing team. When they returned to Tulsa, he worked at Auto Crane, DP Manufacturing, and recently retired from Tulsa Winch Group as VP of Engineering after 27 years of service.David was a natural born mechanic and had a genuine love for racing. He designed and built “really fast” Formula V’s and Formula Fords. David and Johnna spent countless weekends on the road pursuing David’s passion.David discovered golf. He and Johnna joined The Oaks Country Club and made many lifelong friends. David looked forward to his Saturday mornings with The Sunshine Boys and gin games in the afternoons.David traveled the world, some with his job, and many golf trips with Johnna and their friends from the Oaks. He played golf in Scotland, Ireland, The Dominican Republic, the Hawaiian Islands and many other destinations.David was preceded in death by his parents, his beloved cats Fat Boy, OD, and K.C., and his wife of 42 years, Johnna. He is survived by his brother, Randell Jackson, sisters Kathy Louis (Jim), Claudia Sawyer (Patrick), sisters in law Vicki Jackson and Lori Winkle (John), brother in law Dan Coventon (Mary Lu). Numerous nieces and nephews, great nephews and great nieces who loved David and will miss him.In lieu of flowers, donations may be made to Toys for Tots or Life Senior Services.Funeral service to be held at Tulsa University Sharp Chapel, Tues., Nov.5, 2013 at 11:00 am with interment to follow at Memorial Park Cemetery.

The family of David C. Jackson created this Life Tributes page to make it easy to share your memories.