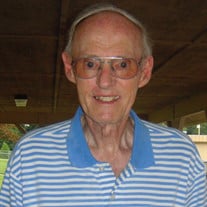 David Ronald Lundquist of Tulsa, OK passed peacefully on to Heaven the morning of April 27, 2020. David was born on November 6, 1936 to Milton and Alice Lundquist in Chicago, IL. Both of his parents were of Swedish descent and he was very proud of his Swedish heritage. David was the middle child, with his brother Roger being the oldest child and his sister Margaret the youngest child. The family moved from Chicago to Florida and then Kansas before settling in Pryor, OK when David was 8 years old. He joined the Boy Scouts in Pryor and was proud to become an Eagle Scout like his father. The small town of Pryor shaped him as the humble, hardworking, and faithful man that lived to serve his family, church, and friends. Upon graduating from Pryor High School, David attended Oklahoma State University and graduated with a Mechanical Engineering degree in 1959. He was an avid fan of the Cowboys and rarely missed a sporting event while attending college. It was during his college years that he met the love of his life and future bride. David first met Carole in a Sunday school class in the summer of 1956 and would later visit her at North Texas State for their first date. Upon graduating from college, David married Carole on January 24th, 1959 at the Pryor Methodist church where they first met. Over their 61 years of marriage, they shared a life deeply devoted to each other and their 3 children. David loved their family vacations, trips to Bella Vista, square dancing with his wife, working out in his yard, card games with friends, attending church, and recently his daily runs to Starbucks with Carole. David and Carole were faithful parishioners at St. Marks United Methodist for over 50 years. David enjoyed a long career in aviation starting with his first job in 1959 at Douglas Aircraft in Santa Monica, CA. His next job in aviation took him to Florida, where he did work for NASA before returning to Tulsa, OK to work for American Airlines. David loved his time at American, the lifetime friends he made during his career, and the experiences he shared with his wife and family. He retired after a successful 32-year career with American Airlines and returned one year later to complete contract work over an additional 20-year period. David was a kind and thoughtful man that had a passion for helping others, making new friends, and staying active. If he wasn’t working out in the yard, you would find David on his daily walks thru the neighborhood well into his 80’s. He was the first person to ask, “How can I help”, whether it was financial support, words of encouragement, or simply spending time with his friends and family in their times of need. His strength, compassion, and support will be greatly missed by all those whose lives David has touched. As a family we are very blessed for the years that we had him in our lives and grateful for the impact he had on all of us. David was preceded in death by his parents Milton and Alice Lundquist, one brother Roger Lundquist, and his daughter Amy Lundquist Kelley. He is survived by his wife Carole, daughter Jenny Caho and her husband Dan, son Andy Lundquist and his wife Vicki; 6 grandchildren, Kim (Brandon), Kara (Gabe), Bryan (Katie), Stephanie (Mickey), Katie, and Colby; 8 great grandchildren and many other nieces, nephews, and cousins. In lieu of flowers, contributions can be made to St Marks Methodist Church or Indian Nations Council Boy Scouts of America. A viewing will be held from 10 a.m. to 12 p.m. on Saturday, May 2, 2020 at Floral Haven Funeral Home. Due to the COVID-19 restrictions, we can only allow 10 people in the viewing room at at time. ***Please, no gatherings of more than 10 people on the Funeral Home property as this is in violation of the restrictions set forth my the Governor of Oklahoma.***

David Ronald Lundquist of Tulsa, OK passed peacefully on to Heaven the morning of April 27, 2020. David was born on November 6, 1936 to Milton and Alice Lundquist in Chicago, IL. Both of his parents were of Swedish descent and he was very... View Obituary & Service Information

The family of David Lundquist created this Life Tributes page to make it easy to share your memories.

Send flowers to the Lundquist family.