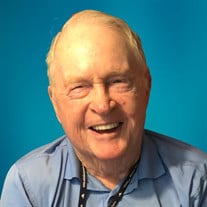 David Michael Mullen, 92 of Tulsa, Oklahoma passed from this life on Friday, February 12, 2021 in a Tulsa hospital after a brief illness. His children were all by his bedside. He was born July 25, 1928 in Dubuque, Iowa to his parents, John Leo Mullen and Eileen Imelda Ahern Mullen. Dave was raised in a large, Irish-Catholic family that lived on a dairy farm. He learned the meaning of hard work but also of music, laughter and love. On August 16, 1958, Dave married RoseMary Caston of Haynesville, LA. Over the next 61 years they created a beautiful family together and many happy memories before RoseMary's passing in April 2020. After bravely serving in the Marines and earning several Purple Hearts in Korea (1951-52), Dave attended the Univ. of Oklahoma, where he completed his degree as a petroleum engineer. His entire career was in the oil industry as a production manager and eventually a vice president. After he semi-retired he served as a consultant for Warren Petroleum. He was respected and liked by the many people he worked with over the years. Dave was very proud of his Irish roots (his wife even called him "Himself", as the Irish do) and made life fun with his wit and humor. He was an avid golfer, spending time on the links up to nearly age 90. Dave loved to sing and was still proudly singing solos in the choir at his assisted living. Dave was always there for his family (his brother Jim was his best friend and golfing buddy), and if he could help it, he never missed a sporting event, a piano recital, or anything else his kids or grandkids were involved in. He was generous with his time and money (and advice!). People in general liked Dave, in part because he had a special skill of remembering names and details of their lives and would ask about them. His golf pals, fellow Rotarians, aides and nurses all loved him, as did his wife of 61 years, his kids and his grandchildren. He will be greatly missed. Dave is survived by his four children, Brian Mullen and his wife Melissa of Tulsa, Oklahoma, Mike Mullen and his wife Vickie of Dallas, Texas, Kelly West and her husband Andy of Orlando, Florida and Tim Mullen and his ex-wife Susan of Tulsa, Oklahoma; fourteen grandchildren, Chris, Kate, McKenzie, Beth, Samantha, Caston, Ethan, Drew and his wife Raquel, Tali, Macy, Tori, Caroline, TJ and Jack; one great-grandson, Wilder; two siblings, Jim Mullen and his wife Darlene, and Eileen Bane and her husband Jim; and many friends and extended family members. He was preceded in death by his parents, John and Eileen Mullen; his loving wife, RoseMary Mullen, and four siblings. A celebration of life memorial service will be held at 10:00 a.m. on Saturday, May 8, 2021 at Floral Haven's Funeral Home Chapel. ***Services will be live streamed starting at 9:55 AM on 5/8/2021. To view the service live, please click on the following link: http://webcast.funeralvue.com/events/viewer/52980

David Michael Mullen, 92 of Tulsa, Oklahoma passed from this life on Friday, February 12, 2021 in a Tulsa hospital after a brief illness. His children were all by his bedside. He was born July 25, 1928 in Dubuque, Iowa to his parents, John... View Obituary & Service Information

The family of David Michael Mullen created this Life Tributes page to make it easy to share your memories.

David Michael Mullen, 92 of Tulsa, Oklahoma passed from this...

Send flowers to the Mullen family.