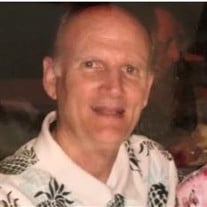 David Gregory Rundle was born November 23, 1943 in Ames, Iowa. He died January 5, 2020 at the age of 76 in Broken Arrow, Oklahoma. His parents were Robert E. Rundle and Lois (née Henselmeier) Rundle. He graduated from University of Chicago with a BS in Chemistry in 1966 and then obtained a MS in Chemistry at Washington University in Saint Louis in 1968. He moved to Tulsa Oklahoma in 1973 and became a self-taught computer programmer. He went to work as a computer analyst, then manager for Telex, and then worked at Sabre until he retired in February, 2006. David made a lot of friends through his hobbies including chess, and ballroom dancing (Argentine Tango was his favorite dance). Being outdoors and walking became a favorite pastime. He was a member of the Elks club. He loved art, performance arts, all types of music, all kinds of games, as well as word, math and logic puzzles, and made the best blueberry pancakes. He started traveling all over the world with his parents at an early age. But his trips with his wife, Sandra, to Maui and the Caribbean were his favorite destinations. His love of science continued as a back yard botanist who catalogued the types of daylilies and a count of daylily blooms yearly. He is survived by his wife, Sandra Rundle, his two brothers, John Rundle and James Rundle, his two children, Melissa Rundle and Robert Rundle, his stepson, Naren Truelove, and his five grand-children: Joshua Rundle, Matthew Rundle, Andrew Rundle, Koen Truelove, and Bryn Truelove. Plus, two cousins: John Nekola and Charlotte Nekola.

David Gregory Rundle was born November 23, 1943 in Ames, Iowa. He died January 5, 2020 at the age of 76 in Broken Arrow, Oklahoma. His parents were Robert E. Rundle and Lois (née Henselmeier) Rundle. He graduated from University of Chicago... View Obituary & Service Information

The family of David Gregory Rundle created this Life Tributes page to make it easy to share your memories.

Send flowers to the Rundle family.