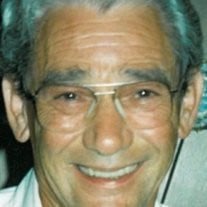 David Swan, 76 years old, of Broken Arrow, OK passed away January 30, 2013 surrounded by his loving family. David was born May 14, 1936 in Renfrew, Scotland to William and Kathleen Swan. Funeral services are scheduled at Floral Haven on Tuesday, February 5th at 3:00 p.m. with burial at Floral Haven Cemetery. Pastor Hobe Ewing will officiate. A eulogy will be given by his friend, Kevin Linebaugh. Dave was a member of First Baptist Church, Broken Arrow. Dave was a graduate of Renfrew High school and a veteran of the Royal Air Force. Dave came to the United States in 1959, and married the love of his life, Sue on June 1, 1962. They celebrated their Golden Wedding Anniversary in 2012. Dave worked for Albertsonâ??s for 40 years, and retired from Food Pyramid. He stayed close to his many co-workers. They said he was â??the best boss in the worldâ?. Dave was an avid fly-fisherman, and loved going to their trailer at Roaring River, Missouri. He loved his annual fishing trip to Minnesota with his son and grandson. He helped care for his father-in-law and mother-in-law in Texas for many years. Dave was there for everyone, never met a stranger, and loved gospel singing. He loved his yard, home, the creek, birds, and excelled on working in it. He loved duck hunting with the boys. He was proud of his heritage, and proud to be an American. Dave and Sue enjoyed their annual cross country trips, the last one being in August to Vancouver, British Columbia. David cherished his family and friends. He adored his two grandsons, David and Drake. Dave was a man of great faith and integrity, which was instrumental in how he lived his life. Dave is survived by his wife Mary â??Sueâ? Swan, a son Steve, daughter-in-law Janet, and grandson David Swan of Tulsa; a daughter Michelle, son-in-law Paul, and grandson Drake Wamsley of Tulsa; and his son, the late beloved Kevin Michael Swan of Broken Arrow. He is also survived by his brother Robert Swan of Texas. The family wishes to thank St. Johnâ??s Hospice and Interim Health Care, and special nurse Abby, for their wondrous care and support. Heaven has welcomed a new angel.

The family of David Swan created this Life Tributes page to make it easy to share your memories.