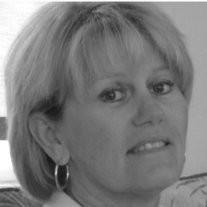 Deborah Jean McGuire, 57, loving wife, mother, and grandmother, died February 8, 2013 after a 2 1/2 year long battle with lung cancer. Deb was born October 8, 1955, the youngest of four children, to Kenneth and Mary Stinley in Wichita, Kansas. After growing up all over the country and graduating from US Grant HIgh School in Oklahoma City, she made her home in Amarillo, TX in 1978. There she raised her two children and was actively involved in the community. She volunteered with Meals on Wheels as a driver, was a volunteer firefighter and EMS worker, and a member of Lake Tanglewood Community Church for over 30 years. An award winning quilter, she has made hundreds of quilts and wall hangings, taught numerous sewing and quilting classes for over 25 years, and published patterns. A collector of antiques and chairs, she had an eye for anything funky or vintage. In 2003 she graduated from Amarillo College as a radiation technologist, then became a certified mammography technologist and worked at the Comprehensive Breast Center of the Harrington Cancer Center. In 2006 she married the love of her life, Stephen McGuire, and moved to Tulsa, OK. She completed the Master Gardener program and their home was featured on the Tulsa Tour of Gardens in 2010. She was a devoted grandmother, “Mad Dog”, to her 3 grandchildren and spent as much time with them as she could. Deb was preceded in death by her parents and two nephews. She is survived by her husband, Stephen McGuire; daughter and son-in-law, Echo and Matt Caraway; son, Kjetil Erik Mjolhus; stepdaughter, Chelsea McGuire; grandchildren, Claire, Reagan, and Hannah Caraway; brother, Dean Stinley; sisters, Ann Donaldson and Kay Schuster; four nieces and nephews; numerous cousins; and a multitude of friends. In lieu of flowers, the family asks that contributions be made to Saint Francis Hospice of Tulsa, Clarehouse of Tulsa, or Lake Tanglewood Community Church in Amarillo. Memorial Services will be at Floral Haven Chapel in Broken Arrow on Thursday, February 14, 2013 at 12:30 PM.

The family of Deborah Jean McGuire created this Life Tributes page to make it easy to share your memories.