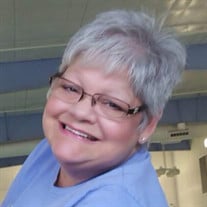 Debra "Debi" Ann Grice, 61, of Broken Arrow, Oklahoma, went to be with our Lord on February 16th, 2021. She was born May 30, 1959, in Dallas, Texas to Sid and Barbara McNatt. Debi met the love of her life, Dan, in 1977 while working at Briggs Weaver Industrial Supplies. They were married on May 19, 1978, in Dallas. Debi became a step-mom to Michael and their family quickly grew, adding Amy, Abby, Matthew, and a lot of fun to the mix. Debi was a stay-at-home mom during the early years of parenting and later enjoyed working in communications and magazine publishing. Dan and Debi moved several times over the years, including Oklahoma, Pennsylvania, and Missouri. Most recently they enjoyed the sunshine and golfing in Arizona and boating with best friends in Texas. They returned to Broken Arrow, Oklahoma in 2018. Debi was preceded in death by her parents, her sister, Ann, her daughter Abby Grice Pack, and son Matthew Grice. She is survived by her husband of 42 years, Dan, her daughter, Amy, and son-in-law Chad, son Michael and daughter-in-law Kim, daughter-in-law Christa and 11 grandchildren. Davis, Noah, Jackson, Emilee, Gavin, Mason, Sophia, Evan, Gabby, Liam, and Mia brought such joy to Debi and gave her the greatest title, Nana. Debi will greatly be missed by her many cousins and friends and all who loved her. A viewing will be Monday, February 22, 2021, from 4-6 pm at Floral Haven Funeral Home in Broken Arrow, Ok. Debi's life will be celebrated at 11:30 am on Tuesday, February 23, 2021, at Arrow Heights Baptist Church in Broken Arrow, Ok.

The family of Debra Ann Grice created this Life Tributes page to make it easy to share your memories.

Send flowers to the Grice family.