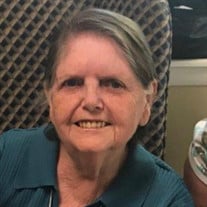 Delores Jeanette Brown, 85, was born on July 12,1935 in Shidler, OK and passed away peacefully on April 23, 2021 in Tulsa, OK after a long battle with heart disease. She was the first born child of Ruby (Copeland) and Leonard Nix .She spent her early life in Oklahoma and graduated from New Lima High School in Seminole in 1953. Upon graduation, she moved to Borger, TX to take an office job where she met Jack Carl Brown and they were married January 1, 1954. She continued with office work as Jack worked on a college degree and then became a chemical engineer. When they had their first of 4 children, Delores became a homemaker and spent years supporting her husband and raising their children as they moved to Lubbock, TX, Big Spring, TX, Coahoma, TX, College Station, TX and Broken Arrow, OK. She loved being involved in school activities, Boy Scouts, Girl Scouts and Little League. Later, she loved being a member of different Ladies' groups. She loved sewing, making crafts and cooking. After losing Jack in 1998, her life revolved around her dominoes, bunco, canasta and bingo groups. She was a caregiver all her life. If any family member needed help, she was there. She touched many lives with her caring nature. Delores was preceded in death by her parents, her husband Jack, 2 sons William Jack and Charles Gregory, 3 sisters Barbara, Carol and Diane and 1 brother David. She is survived by her daughter Kathy Jean, 1 son Stephen Alan, 3 brothers Leonard, Louis and Stanley, 3 grandchildren Nici, Dusty and Krislynn and their families which includes 8 great grandchildren. Visitation will be held on Thursday, April 29 from 4 pm - 6 pm. Services will be at 10 am on Friday, April 30 in the Floral Haven Chapel. For those unable to attend, follow the link for webcasting services: View Funeral Webcast

Delores Jeanette Brown, 85, was born on July 12,1935 in Shidler, OK and passed away peacefully on April 23, 2021 in Tulsa, OK after a long battle with heart disease. She was the first born child of Ruby (Copeland) and Leonard Nix .She spent... View Obituary & Service Information

The family of Delores Brown created this Life Tributes page to make it easy to share your memories.

Send flowers to the Brown family.