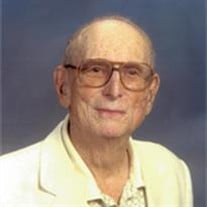 Dency Henley, 95, went home to be with the Lord on March 29, 2011 in Broken Arrow, Oklahoma.Â  He was born on January 23, 1916 in Stillwell, OK to Lorenzo Dowell Henley and Viola Mae Peters.Â  His sister Lois Pickett preceded him in death.Â... View Obituary & Service Information

The family of Dency Henley created this Life Tributes page to make it easy to share your memories.