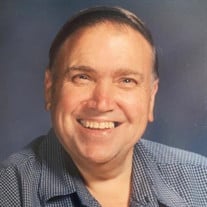 Dennis Leroy Mullin, precious son, brother, & uncle, passed away peacefully in his mother’s arms, Jan. 4th, 2022, at 11:30 PM. He is survived by his parents, Bob & Darlene Carpenter, brothers Steve Mullin and Gary Cooper, sisters Jana Hill & husband Travis, & Jamie Carpenter, of Tulsa. He is preceded in death by his brother, Mark William Mullin. Dennis was born, April 2nd, 1948, at 1:40 PM in Lawrence Kansas, the first of 5 children. He was later joined by brothers Steve and Mark all 2 years apart, and the boys were inseparable. Later, upon learning of his diagnosis of Cerebral Palsy, the family moved to Tulsa, OK, to enroll Dennis in a program for special needs children, his beloved Aunt Barbara, and researched and found, as in those days, special needs children were typically institutionalized. His mom, dad, & Aunt Barbara, were his greatest advocates. Once in Tulsa, Dennis attended Longfellow Elementary School, where he flourished and thrived. He blended with the kids and loved being a cross guard, playing football, baseball, and joining Cub Scouts. He later attended Tulsa Will Rogers High School, and was a proud graduate of the class of 1966. In high school, Dennis rode his bicycle and delivered papers for Tulsa World, never missing a single. It was during this time that his little sisters Jana & Jamie were born. He loved being a big brother to the girls, who also loved teasing him and driving him crazy when he babysat. After graduation, Dennis worked at Hannah Lumber Company, and eventually found his lifelong career as a janitor at Tulsa Public Schools. He was loved by all the kids & Dennis loved them as well. His favorite thing was playing Santa every year, with his round stature and jolly laugh. He received awards for cleanest school many times and retired after 27 years of service at Tulsa Public Schools. Dennis sang choir at Rose Hill Methodist Church & later became an active member & usher at First United Methodist Church, Tulsa. He joined the youth group & they became like family, traveling together to Jerusalem, Paris, Mexico & Jamaica. Dennis loved to travel, & the beach was his favorite. He was a funny guy and loved to roam, ending up lost, many times. God had His hand on Dennis, and kind humans throughout his life have always helped guide him back home. He was crazy about Christmas, his beloved OU Sooners, his beautiful home in Midtown, and his crimson OU car, decked out in all things OU. But more than anything, Dennis loved his family. He never married or had children of his own, so he referred to his nieces and nephews lovingly as his “grandbabies.” He never missed a family celebration and loved hand-picking all gifts. Dennis had an amazing life & he will be incredibly missed by many, but especially his family. While we mourn, we also celebrate his heavenly reception with our Savior, Jesus Christ, our brother Mark who died of cancer in November 2020, and Aunt Barbara. What a party they must be having. We also celebrate Dennis’s beautiful & amazing life, in spite of his disabilities & we hope to encourage others to live life to the fullest as Dennis did.

The family of Dennis Mullin created this Life Tributes page to make it easy to share your memories.

Send flowers to the Mullin family.