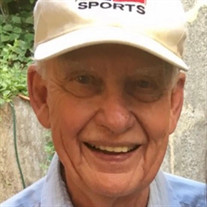 Derl Logan Wood was the last of five children born to Logan Wood and Wilma Ona Hisaw Wood, August 6, 1932 in Hoyt, OK. His older siblings were Betty Holdridge, Jim Wood, Janis Riker and Ruby Sharp. Derl was preceded in death by his parents and his siblings. When he was eight years old his family moved to Tulsa and he attended Whittier Elementary and Cleveland Jr. High. Derl graduated Will Rogers High School 1950 . During his senior year at Will Rogers he worked for Retail Merchants Credit Union downtown Tulsa and continued working there while earning his BS in Accounting at the University of Tulsa. Derl married the love of his life Kenny Ann Gibson on June 4, 1954 and they were blessed with 66 ½ years of marriage. February 4, 1955 Derl accepted an accounting position with Warren Petroleum and retired as the Director of Financial Accounting/Services in October 1986 after 31 years of service. Derl always loved sports. He played church softball for Memorial Christian at Archer Park in Tulsa. He played tennis at the University of Tulsa . During early marriage he bowled twice a week for Warren in the Petroleum league but years later returned to tennis. Each year after the Tulsa State Fair he and his tennis buddies set up the “pig barn” for tennis. It had to be cleaned, striped, netted, etc to begin winter indoor tennis. At the time these courts were the only indoor tennis courts in Tulsa except for a few private clubs. Derl could beat most all comers at their tennis game. He encouraged his children to engage in sports and coached their softball/baseball teams. Derl earned many trophies for bowling, tennis and golf, and making three holes-in-one on his favorite golf course, Old Page. Tennis was his favorite participating sport but he inherited his love of the St. Louis Cardinals from his dad and they spent many summers nights sitting outdoors listening to the radio together and memorizing stats. He shared the love of the Cardinals with his son, Bruce. Derl was even chosen to be a Cardboard Fan at the Cardinal baseball games 2020 season. Derl took up running early 1970 to relieve the stress of work and family and encouraged daughter Carol to run with him. They participated in many runs together including the Tulsa Runs, half-marathons and White Rock Marathon. He competed most weekend and received many trophies and medals. Derl became an avid golfer and was a member of the Senior Golf Association at Page Belcher Golf Course.. His name appeared in the Tulsa World frequently for three holes-in-one and for ”shooting his age” or under. After retirement Derl and Kenny Ann traveled many happy miles together sharing many adventures in all the states except Alaska. He was a role model for his love of family and his unquestionable integrity. His sense of humor kept everyone on their toes and ready for a verbal joust at any time. Derl shared this gift and his love of laughter with his daughter, Julie. Derl was a special Husband, Father, Grandfather, Great Grandfather, and Friend and we are saddened by his passing but full of gratitude that he is healed in Heaven and that we will see him again. Derl is survived by his wife, Kenny Ann Gibson Wood; son Bruce Alan Wood; daughter Carol Hancock Miller, husband Keith Miller; daughter Julie Kay Nave, husband Steve Nave. Six grandchildren: Alan Hancock, wife, Lindsi; Jill Davis, husband Beau ; Alanna Gaskins, husband, Mitchell; Jaimee Bruce, husband Jake; Hannah Nave; Brooke Nave. Six great-grandchildren: Tyce, Cale, Jace, Wade, Skye, Lyla. Private graveside rites officiated by Beau Davis, Minister at Singing Oaks Church of Christ, Denton, Texas.

The family of Derl Logan Wood created this Life Tributes page to make it easy to share your memories.

Derl Logan Wood was the last of five children born to Logan Wood...

Send flowers to the Wood family.