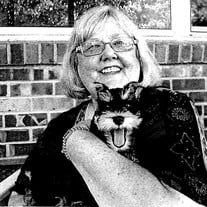 Diana Kay VanLandingham lost her battle with kidney disease on May 3, 2021 at Brookdale in Broken Arrow, Oklahoma. Diana was born to Robert (Bob) VanLandingham and Betty Doris Howard VanLandingham on June 16, 1947 in Tulsa, Oklahoma. She grew up in Sapulpa, Oklahoma and graduated with honors from Sapulpa High School in 1965 and went on to Oklahoma State University and graduated in 1969 with a B.S. degree in history. Diana returned to Sapulpa and taught Junior High history for the next three years and then moved to Long Beach, California to further her education. Diana enrolled at California State University at Long Beach and graduated with honors in 1975 with a master's degree in Library Science and then She returned to Sapulpa to head up the Sapulpa High School Library the fall of 1975.. She spent her entire teaching career in the Sapulpa Public School system before retiring in 2013 and then did substitute teaching in Sapulpa for the next 5 years before retiring permanently. Diana was deeply loved and admired by her colleagues and many students over the years and will be greatly missed by all. Diana was a Tulsa resident all her adult life and took her mother into her home the last 15 years before her mother passed in 2015. You could always find Diana and her friend every Saturday morning at the Tulsa Flea Market or making crafts and Christmas ornaments in her spare time. She had a large collection of Christmas ornaments and many different Christmas Santa's. Diana deeply loved her little Schnauzer, Zoey, her family, her longtime friend from college, her books, and many yearly travels with her beloved friends. Diana was preceded in death by her parents, Bob VanLandingaham and Betty VanLandingham. She is survived by her brother, Kayle VanLandingham, her sister, Vickie ( Darrel) Purdy. sister in law, Kay VanLandingham. .Nieces and nephews, Chris (Lisa) VanLandingham, Mark (Heidi) VanLandingham, Dawn (Dan) Bridgewater, Keynon (Natalie) Purdy, Amber (Jimmy) Maltese, Karynne (Josh) Carriger , and numerous great nieces and nephews. Private Service Planned.

Diana Kay VanLandingham lost her battle with kidney disease on May 3, 2021 at Brookdale in Broken Arrow, Oklahoma. Diana was born to Robert (Bob) VanLandingham and Betty Doris Howard VanLandingham on June 16, 1947 in Tulsa, Oklahoma. She grew... View Obituary & Service Information

The family of Diana Kay VanLandingham created this Life Tributes page to make it easy to share your memories.

Diana Kay VanLandingham lost her battle with kidney disease on...

Send flowers to the VanLandingham family.