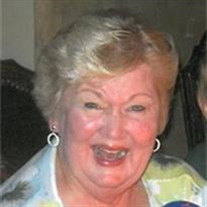 After a protraced battle with cancer, Diane Jean (Nystrom) Weinwurm entered intoÂ her Father’s heavenly kingdom on December 5, 2012.Â  Diane was a devoted wife, selfless friend, and loving mother and grandmother who will be deeply missed by those fortunate enough to have known her. Born in Los Angeles on August 22, 1937, Diane was a resourceful child who worked hard to secure a spot for herself at the prestigious Westlake School for Girls. She went on to earn a bachelor’s degreee in psychology from the University of Calfornia , Los Angles in 1959. Diane married the love of her life, George Weinwurm, June 10, 1961.Â  She dedicated herself to making a comfortable home for her husband and children, and brightening the lives of underprivileged individuals.Â  Diane coordinated fundraisers to send economically disadvantaged children to summer camp, led various church and civic groups, and did other volunteer work in support of impoverished families. In 2004, Diane and George left southern California to be closer to their children.Â  The settled in Verdigris, Oklahoma just before the birth of their second grandson.Â  Known as Mimi, Diane cherished spoiling and spending time with all three of her grandchildren. Diane is survived by her husband of 51 years, George, son and daughter-in-law, Dan and JenniferÂ Weinwurm of Springrfield, Va; daughter and son-in-law, Krista and Fred Lewis; and grandchildren Matthew,Â  Landon, and Sarah. Many people, and most especially Diane’s second family at Verdigris United Methodist Church, rallied around the Weinwurms and helped Diane transition from this life to her next home.Â  A memorial service will be held at 2 p.m. Monday, December 10th, at Verdigris United Methodist Church, 8936 E. 530 Road, Claremore. InÂ lieu of flowers, the family asks that donations in Diane’s memory be made to theÂ children’s ministry at Verdigris United Methodist Church.

After a protraced battle with cancer, Diane Jean (Nystrom) Weinwurm entered intoÂ her Father&#8217;s heavenly kingdom on December 5, 2012.Â  Diane was a devoted wife, selfless friend, and loving mother and grandmother who will be deeply missed... View Obituary & Service Information

The family of Diane Jean Weinwurm created this Life Tributes page to make it easy to share your memories.

After a protraced battle with cancer, Diane Jean (Nystrom) Weinwurm...