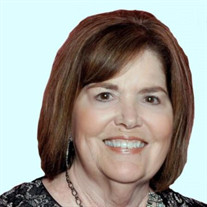 Dolores Kaye (Bean) Arrowood was born April 18th, 1949, to Bob and Alma Bean in Tulsa, Oklahoma. She left this life after an inspiring fight against brain cancer on May 5th, 2020. Dolores grew up in the community of Berryhill where she loved basketball, music, and family. As an eighth grader playing basketball in her front yard, she met Larry Arrowood who stopped by to play basketball with a cute neighbor girl. The two later married and shared fifty years of marriage. In high school, she played on the Berryhill basketball team leading them to the state tournament three times—a record still standing today. She loved barrel racing, rodeo, and going to the lake with her brother Bobby and her mom and dad. Dolores waited tables at the downtown Walgreens and was a photographer for Beverly Studios while paying her way through college at the University of Tulsa. After Larry returned from the service, he also attended TU, and soon the two were married. Dolores received her Master’s degree in education and began her career at Tulsa Union alongside Larry. She was a high school English teacher and also a cheer and yearbook sponsor for many years. Dolores was blessed with her baby brother Patrick whom she adored. Larry and Dolores took many family vacations to Colorado, New Mexico, and the lake with her little brother. Larry and Dolores had their only son Jim, and he became the focus of their love. The three of them were inseparable attending high school baseball games that Larry coached, traveling, and camping at the lake for weeks at a time. Later the family spent countless hours playing little league baseball across the midwest where Dolores was always the biggest fan. Jim married Jennifer in 2002, and later had Dolores’s first grandson James. She was beyond excited and proud to be a grandma. As James would say his “Momma D” was the coolest grandma ever—riding roller coasters, going to Branson, and never missing a game or school event. Dolores was then blessed with her second grandchild Emily who also became the focus of her amazing love. She cared for both grandkids on a daily basis and showed them what true family meant. Dolores was preceded in death by her father, Bob Bean Sr. of Tulsa, OK. She is survived by her mother, Alma Bean of Tulsa, OK; her husband Larry Arrowood of Sand Springs, OK; her son, Jim Arrowood and wife Jennifer of Sand Springs, OK; her grandchildren James and Emily Arrowood of Sand Springs, OK; her brothers Bob Bean Jr. and wife Harolyn, and James Patrick Bean and wife Tracy of Tulsa, OK. A host of other relatives and friends also cherish her memory. We would like to thank Saint John’s 14th Floor, The Garden’s Skilled Nursing, Season’s Hospice, Linda Cranfield, and Lindsey Lazaroff for helping take care of Dolores these past months.

Dolores Kaye (Bean) Arrowood was born April 18th, 1949, to Bob and Alma Bean in Tulsa, Oklahoma. She left this life after an inspiring fight against brain cancer on May 5th, 2020. Dolores grew up in the community of Berryhill where she loved... View Obituary & Service Information

The family of Dolores Kaye Arrowood created this Life Tributes page to make it easy to share your memories.

Send flowers to the Arrowood family.