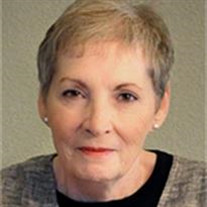 Dolores Jane Secrist was born in Paris, AR, in 1938 to Darwin and Trellis Smith.Â  She spent many happy childhood years in Noel, MO, and moved to Tulsa when she was 16. She graduated from Will Rogers High School in 1957 where she met the love of her life and soul mate, David Earl Secrist.Â Â  She supported him in his career with the Tulsa Police Department where he retired as Deputy Chief of Police. Dolores worked for Tulsa Internal Medicine for 25 years showing her tremendous compassion as an office nurse, but her true calling was her family.Â  Dolores and Earl had 3 children, who in turn blessed them with 10 grandchildren and 1 great granddaughter.Â  Dolores was everything to her children, and they were everything to her. Dolores was engaged in a war against cancer.Â  With the Lordâ??s help, she claimed victory in her first battle with multiple myeloma, but cancer struck again; and her victory came in a different way.Â Â  She passed away peacefully at her home, surrounded by her family, on December 16, 2011.Â  She is now free from pain, and cancer can no longer touch her. Dolores is survived by her adoring husband, Earl, and their three children and their families:Â  Mark Secrist and his wife, Cheryl, and children Megan, Jaret, Mason, Walker, Morgan and granddaughter Makina; Mike Secrist and his wife, Gina, and sons Joshua, Jordan and Joseph; Melanie Walenciak, her husband, Jim, and sons Cody and Dillon.Â  She is also survived by her mother, Trellis, of Kingwood, TX, and 2 sisters, Joyce Wehnes of Kingwood, TX, and Brenda Nur of Lake Forest, CA.Â Â Â  She was preceded in death by her father, Darwin Smith, and her brother, Darwin Smith, Jr. Services will be at 1:00 pm on Tuesday, December 20,, at Eastwood Baptist Church in Tulsa where she was a member.Â  Burial will follow in Floral Haven Memorial Park Â in Broken Arrow.Â Â  In lieu of flowers donations can be made to the Cholangiocarcinoma Foundation or St. Johnâ??s Hospice.Â Â  Peace I leave with you, my peace I give unto you:Â  not as the world giveth, give I unto you.Â  Let not your heart be troubled, neither let it be afraid.Â  ~John 14:27

Dolores Jane Secrist was born in Paris, AR, in 1938 to Darwin and Trellis Smith.Â  She spent many happy childhood years in Noel, MO, and moved to Tulsa when she was 16. She graduated from Will Rogers High School in 1957 where she met the love... View Obituary & Service Information

The family of Dolores Jane Secrist created this Life Tributes page to make it easy to share your memories.