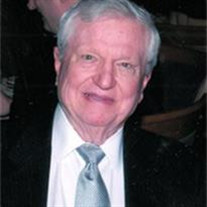 Don Ranson Boling June 9, 1926 â?? November 1, 2012 Don Ranson Boling passed away at the age of 86 on Thursday, November 1, 2012 in Tulsa, Ok after a lengthy illness. Don was born June 9, 1926 in Wichita Falls, TX to Betha Lee and Chauncey Ranson Boling. Upon his graduation from Tulsa Central High School in 1943, Don joined the Army Air Force and was stationed stateside. Upon discharge from the service, Don attended the University of Tulsa where he was a member of Kappa Alpha Order. He earned a Bachelor of Science in Petroleum Engineering from TU in 1949. He continued his education in the TU Strategic Planning Program. Don furthered his education at University of Houston in the Executive Management Development Program. First employed with Skelly Oil Company in Texas, Don later joined C-E Natco in Tulsa where he ultimately became Senior Vice President of Marketing and Field Operations for both the companyâ??s domestic and international operations. His work also included responsibilities for five subsidiary companies in Canada, United Kingdom, France, Singapore and the Netherlands. Don authored and presented numerous technical papers to professional societies and was a contributing author to oil production reference books. Transferring multiple times with C-E Natco, Don moved from Oklahoma to Texas, Louisiana, Connecticut, California and back to Oklahoma. After retirement from C-E Natco, Don launched his own company, Northpoint Industries, Inc., which he ran until 1998. Don was a Senior Manber of the Society of Petroleum Engineers and was a Registered Professional Engineer. His other memberships included the American Petroleum Institute and the American Institute of Mining, Metallurgical and Petroleum Engineers. Don enjoyed golfing, boating, hunting and fishing. He was a Deacon and member of Kirk of the Hills Presbyterian Church in Tulsa, OK until declining health prevented his active participation. Don was predeceased by his first wife, Eniver Lee Boling in 1998. The had two daughters and on son. In 2000, he married Evelyn Gagnon who remained by his side until the time of his death, showing constant devotion, love, and care. Don is survived by his wife, Evelyn Boling; his daughters, Donna Wagner and Ellen Ezell; his son, Rick Boling; and his grandson, Wyatt Ezell. He is also survived by Evelynâ??s children and their spouses, Gary and Shannon Gagnon; Carol and Bob Naifeh; her grandsons Nick, Chuck, and Jake Naifeh; and her great-grandson, Nicholas Naifer. A Memorial Service will be held at Montereau Warren Chapel, 6800 S. Granite Ave. in Tulsa, OK at 11:00 a.m. on Thursday, November 8, 2012 Memorial contribution may be made to the Alzheimerâ??s Association, American Heart Association, or the charity of your choice.

The family of Don R. Boling created this Life Tributes page to make it easy to share your memories.