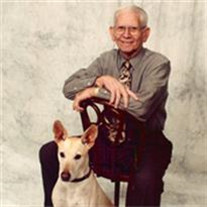 Don D. Sheriff, 90, longtime Tulsan, passed away June 20, 2010, at Day Spring Assisted Living in Plano, TX. He was preceded in death by Ina, his wife of 46 years. He was born January 2, 1920 in Hollis, OK, raised in Oklahoma City, and spent most of his adult life in Tulsa. Don lived a full life with many interesting experiences including serving on the Advanced Survey Crew for the Alaska-Canada Highway where he lived in the Yukon for 18 months. He was a 1st Lieutenant serving as a Unit Tank Commander headquartered in the Western Pacific Base Command in WWII. There he met Ina, a nurse on a hospital ship, who later became his wife. He was called to serve his country again in the Korean conflict. He worked in Iceland and had a long varied career in materials handling and design engineering which included designing packaging for the Apollo Space Program which won national awards. He enjoyed his time managing warehouses and working for the City of Tulsa. Don had a heart to contribute to his community. As a faithful blood donor, he gave over 16 gallons of blood to the American Red Cross. But he would tell you, his most rewarding effort was serving as Ambassador for The Little Light House. He had a great passion for the children and much respect for the staff at the school. Don delighted in helping in any way he could by making educational items or connections in the community for The Little Light House. Don loved to ice skate with his daughters, tinker in the garage, take short road trips with his family and just sit outside and enjoy the birds, squirrels and sunshine. He loved pets which included a variety of dogs, a bear cub, monkey and later in life his horse, Buck, and mule, Molly, and his constant companion, Buddy. He enjoyed humor, history and outdoor cooking. Woodworking became his latest hobby making U.S. flag and other puzzles. He was always an optimist. Loving God, he read his Bible even in later years when reading became difficult. Six years ago, Don moved to Plano, Texas to be near his grandsons. He was able to enjoy their musical talents, Boy Scout accomplishments, AWANA, karate, football, home school achievements, and to be a part of their daily lives. Friendships were important to Don, and he had wonderful lifelong friends. God saw to it that some of those were in Plano when he moved, including his secretary from the 50’s, his “other daughter”, and a longtime neighbor. He also made many new ones from church and was blessed with a special friend whose weekly visits Don cherished. Don spent his last year and a half at Day Spring Assisted Living in Plano, TX where he was loved and cared for by the most amazing staff of this non-profit, church affiliated home. Both staff and residents became a second family to him. Thank you to all who have befriended and loved our Dad. Memorial contributions may be made to: The Little Light House, 5120 East 36th Street, Tulsa, OK 74135, Day Spring Assisted Living Employee Fund, 6400 Cheyenne Trail, Plano, TX 75023, or a charity of your choice. Funeral Services will be held 3:00 PM, Monday, June 28, 2010 at Floral Haven Funeral Home Chapel in Broken Arrow, Oklahoma. Interment will follow in Floral Haven Memorial Gardens Veterans Field of Honor, Phase II.Survived By: his daughters, Donna Sisk (Mike), Vicki Drew (Steve), and Sue Sheriff, and his grandsons, Kyle, Nathan and Justin Drew. Don is also survived by devoted siblings Burt Sheriff (Marcine) and Martha Hammon, as well as many dear nieces, nephews and lifelong friends.

Don D. Sheriff, 90, longtime Tulsan, passed away June 20, 2010, at Day Spring Assisted Living in Plano, TX. He was preceded in death by Ina, his wife of 46 years. He was born January 2, 1920 in Hollis, OK, raised in Oklahoma City, and spent... View Obituary & Service Information

The family of Don D. Sheriff created this Life Tributes page to make it easy to share your memories.