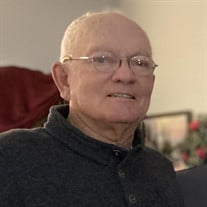 Donald Ray Boyles was born December 24, 1937 in Sand Springs, Oklahoma to Nelson Morrison and Barbara Allene Boyles. He entered eternity with his Savior February 26, 2020 in Tulsa, Oklahoma. Don was a brother to Guy Boyles, Larry Boyles and Delmer Boyles. Don graduated from Sand Springs High School. His passion for all things aviation began at 16-years-old. He took flying lessons. He worked various assembly and mechanic jobs and also bought, sold and traded dozens of cars. His longest tenure was at Byron Jackson as a crater/box maker. Don married Brenda Joyce Graham July 17, 1959. They were married 60 years. John, Jerry, Donna, and Sheila had the privilege of calling him “Dad”. Fun memories include: -Making a go-cart from a washing machine motor. -Picking Sheila up from kindergarten on his motorcycle and taking her for a push-up. -Being the one to fix all the bikes and air up the tires for the neighborhood kids. -Taking Donna to a softball game in her uniform on the back of his motorcycle. He was creative, innovative, adventurous and generous. He would fix anything for anyone! He served as a faithful member of Garnett Road Baptist Church. He helped with grounds keeping and Sunday School. His claim to fame was recognition in the Guinness Book of Records. On September 7, 1970, he made the first known parachute jump at the Royal Gorge Bridge. His parachute is now featured at the Royal Gorge Museum. (https://royalgorgehistorycenter.wordpress.com/2018/09/07/oh-chute/) His love for skydiving and base-jumping led him to make over 1000 jumps. His children and some grandchildren inherited a passion for skydiving too. He loved flying his SkyRider all around the Tulsa area and would often wave to people below. He logged over 800 hours. Some other hobbies included rattlesnake hunting, riding motorcycles and unicycles, planting tomatoes, dumpster-diving, mall-walking, participating in Free Wheel, spending time at Harvey-Young Airport, spending time outside, reading the newspaper and parachute magazines, taking pictures and making doubles so he could give them away. He was a sweet father-in-law to Leesa, Debbie, Chris and Clyde. He was a proud Pepa to Leah and Josh, Johnathan and Anne, Ashley, Lauren, Rachel, Brent and Rilee, Sean, Justine, and Perry, and great-grandchildren Hannah, Lily, Maci, Norah, Henry, Rhett and Collins. He was so very loved and will be greatly missed by all who knew him.

The family of Donald Ray Boyles created this Life Tributes page to make it easy to share your memories.

Send flowers to the Boyles family.