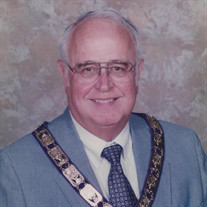 Donald L. Dufford, Jr., of Broken Arrow, Oklahoma, passed away December 19, 2021, at the age of 85. He was born March 9, 1936, in Tulsa, Oklahoma, to Donald Lloyd Dufford, Sr., and Nila Aileene (Ford) Dufford. Don grew up in Sapulpa and was a 1954 graduate of Sapulpa High School. He began his collegiate career at the University of Oklahoma, culminating at the University of Tulsa by earning his Bachelor of Science in 1972. Don proudly served in the Army National Guard and was an accounting clerk at Orbit Valve Company in Tulsa prior to joining the Army. Always a dedicated and beloved employee, Don retired from Marsh and McLennan in 1995, where he was Vice President and head of the accounting department. He was honored to be a founding member of the Broken Arrow Elks Lodge, BPOE #2673, serving as Exalted Ruler and for 18 years as Treasurer. Above all, Don was a devoted family man and trusted friend. He took great pride in his many successful home improvement projects and thoroughly enjoyed just being outside. Riding his motorcycle, relaxing by his pool, and grilling his famous barbecue bologna for his family brought him immeasurable joy. Don had a quick, dry wit that was revered by his family and countless friends. Don has left a profound and lasting legacy, for which he would be so proud. Don was preceded in death by his parents; his wife Mary and infant son; his wife Katherine; Carol’s son, Thomas W. Atkinson, III; and grandson, Thomas W. Atkinson, IV (TW). Don is survived by his loving wife of 20 years, Carol Dufford; son, Troy Dufford; daughter and son-in-law, Tracie and Jimmy Bradfield; Carol’s children and their spouses, Kelli and Kevin Arnwine; Julia and David Potter; Jamey Hamilton; 6 grandchildren; 5 great-grandchildren; brother, Ed Dufford, and wife, Donna; sister, Sandra Wells, and husband, Carl; sister, Nancy Payne; and many nieces and nephews. A celebration of Don’s life will be held at the Broken Arrow Elks Lodge on Tuesday, January 4, 2022, at 1:00 p.m. Private interment to take place at Floral Haven.

The family of Donald Lloyd Dufford Jr. created this Life Tributes page to make it easy to share your memories.

Send flowers to the Dufford family.