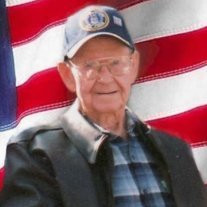 Don Walker, age 91, passed away on Saturday, May 18, 2013 in Peggs, Oklahoma. Don was born on January 24, 1922 in Green Forest, Arkansas to his parents, Carlis Leonard and Marinda Jane Walker. He married Lillian â??Tinyâ? Jones on July 31, 1942 and they made their home in Tulsa, Oklahoma before moving to Peggs, Oklahoma in 1973. Don Walker was a Veteran of WWII. He joined what was then known as the Army Air Corps on April 12, 1943, and attained the rank of Technical Sergeant. He was Radio Operator and Top Turret Gunner in a B-24 Liberator Bomber plane. He participated in 35 missions in the European Theater of Operations with the 8th Air Force/ 44th Bomb Group/ 68th Bomb Squadron in Shipdham, England. He took part in several well-known battles of WWII including the Battle of the Bulge / the Battle of France / and the Battle of Rhineland, Germany for which he received many medals. These included 3 bronze stars, The European African Middle East Campaign Service Ribbon, The Go256 HQ 2nd Bomb Division 44 Air Medal, 4 Bronze Oak Leaf Clusters, and a Marksman Pistol Badge. On his 21st Bombing Mission his plan was shot down and he and the other crew members were forced to bail out landing just outside enemy lines in France. Don said â??Everyone there wanted to be there to get the job done, even the ones who didnâ??t volunteer.â? Don was very proud to serve his country. Don was preceded in death by his wife, Tiny in 1993, an infant daughter, Dawneen Gayle in 1964, his parents, Carlis Leonard and Marinda Jane Walker, three brothers, Carl, Ross, and Norman Walker, and one sister, Lynetta Thomason. Don is survived by his 11 children and their spouses, Donna and Rudy, Bob, Debbie and Richard, Gary and Lupe, Mike and Lauree, Scott and Kathy, Dottie and Paul, Deanne and David, Danna and Cortez, Darla and Brad, and Deniece and Alan, 27 grandchildren, 30 great grandchildren, 1 great great grandson, 1 brother and spouse, Jimmie and Edith Walker, and 1 brother in law, John Thomason

Don Walker, age 91, passed away on Saturday, May 18, 2013 in Peggs, Oklahoma. Don was born on January 24, 1922 in Green Forest, Arkansas to his parents, Carlis Leonard and Marinda Jane Walker. He married Lillian â??Tinyâ? Jones on July 31,... View Obituary & Service Information

The family of Donald “Don” Eugene Walker created this Life Tributes page to make it easy to share your memories.