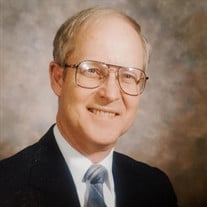 Donald Joe Terry, 88, of Sunrise Beach passed away January 20, 2022 at Osage Beach, Missouri. Born May 23, 1933 in Collingsworth County Texas, he graduated from Wellington High School in 1950 where he enjoyed playing basketball and football. During his teen summers when he wasn't hauling ice blocks locally or working as a farmhand, he spent his time as a lifeguard. Don enjoyed fishing and camping with his family in Colorado. He also enjoyed coin collecting, assembling model airplanes, and solving crosswords. Don's military service was unique in that he served in 3 separate branches. His Navy career began in 1953 and included time spent on the USS Shelton, Bauer, and Saratoga ships. He then went on to serve in the Air Force and finished his 22 years of service to our country in the Army National Guard in 1995. A devoted Christian serving his Heavenly Father, Don always tried to be a living example for others. He was known for his easy going personality, but was a staunch supporter of what is right, and would stand his ground for his convictions. Don was an avid worker for the Lord teaching Bible classes, leading singing, and edifying so many others throughout his years. He was also a hardworking elder who oversaw several congregations until his wife, the absolute love of his life, Donnie Jo (Cole) passed away in 2006. He is preceded in death by his parents Joseph Conley Terry and Sarah Mamie (King), and his brother Herman Claude "H.C." Terry. He is survived by his son Kenneth Dale & Dianna Terry of Edmond, OK and his daughter Karen Denise & Randall Pritchard of Quitman, TX. Also his 6 grandchildren Denton (Vanezza) Terry of Mustang, OK, Derek (Katalinah)Terry of Edmond, OK, Keira (Matthew) Feldner of Edmond, OK, Misty (Rudy) Loya of N. Richland Hills, TX, Sharon Posey of Amarillo, TX, Justin Posey of Amarillo, TX, and 10 great-grand children. A graveside service will be held at 2:00 p.m. on Thursday, January 27th, 2022 at Floral Haven Cemetery in Broken Arrow, OK and the family will receive friends from 10:00 a.m. to 1:30 p.m. at the funeral home. Anyone wishing to make a memorial contribution to help Don's latest work for the church may send to: Lake of the Ozarks Church of Christ C/O Dale Marquart 3310 State Road A Montreal, MO 65591

The family of Donald Joe Terry created this Life Tributes page to make it easy to share your memories.

Send flowers to the Terry family.