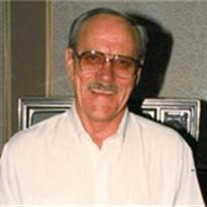 Donald Ray (Don) Wilson of Tulsa, Oklahoma, passed away peacefully in his sleep on October 16th, 2012 at the ageÂ of 79. Don was born to Virgil and Dovie Wilson on July 1st, 1933 in Montgomery County, Arkansas. He is survived by his wife of 56 years, Joan Wilson (Melton), a daughter Cari Smith of Broken Arrow, OK, with her husband Aaron, a son, James Wilson of Tulsa, OK., with his wife, Stephanie, along with 14 grandchildren and 11 great-grandchildren. He is also survived by a sister, Ellawease Parton of Farmersville, CA, and a brother, Wayne Wilson of Exeter, CA. Don also leaves behind his loyal sidekick, Copper, his beloved Dachshund. Don was a veteran. He proudly served in the U.S. Army during the Korean War. He was hired by the U.S. Postal Service in 1961, and became one of the first mail carriers in Farmersville, CA. He became the Postmaster in Farmersville in 1967 and served in that capacity for the next 25 years. He was a member of numerous civic organizations while in Farmersville, including the Lions Club, the VFW, the Chamber of Commence, and the City Counsel. He was elected by the Chamber of Commerce as their Man of the Year in 1974. Don had many hobbies including hunting, fishing and golf. His true passion however was gardening. He was known to grow one on the best gardens around. He was a sports fan and enjoyed rooting for the Dallas Cowboys and Cincinnati Reds. He was an avid reader, and you could always find a Larry McMurtry novel on his table. A very important part of Donâ??s life was his sobriety. He was a member of a 12-step program, and has over 32 years of sobriety. He impacted the lives of countless people and was always willing to help anyone in need. He was passionate when speaking to groups or individuals about alcoholism and recovery. He had many friends in the program, and he cared about each and every one. He is preceded in death by his parents, along with two sisters, Judy Wall and Freida Marsh.

Donald Ray (Don) Wilson of Tulsa, Oklahoma, passed away peacefully in his sleep on October 16th, 2012 at the ageÂ of 79. Don was born to Virgil and Dovie Wilson on July 1st, 1933 in Montgomery County, Arkansas. He is survived by his wife of... View Obituary & Service Information

The family of Donald Ray Wilson created this Life Tributes page to make it easy to share your memories.