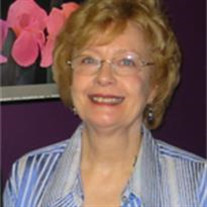 Donna Mae (Montgomery) Stidham was adored by all her family friends, coworkers and acquaintances.Â She loved and treated everyone like family.Â She brought out the best in everyone she touched and was the voice of reason who modeled kindness, compassion and forgiveness.Â  Even battling cancer she was more worried about her family and friends.Â She was a positive beacon of light that shone even in her darkest hours.Â She loved to tell stories of good times and great memories she had with people.Â In her honor, we would like to invite people to post their memories and/or inspirational statements in Donnaâ??s memory. Â  Donna Mae Spencer was born on March 30, 1947 to John and Wanda Spencer in Kansas City, MO.Â She passed at age 65 on August 5, 2012 in Saint Francis Neuro-ICU, surrounded by family, after a two year battle with multiple myeloma cancer.Â She spent most of her childhood and high school days in Prairie Village, Kansas.Â Donna married Charles Stidham on September 8, 1994.Â  Before starting her working career, Donna dedicated herself in volunteer roles like volunteer coordinator at Union High School, Girl Scout troop leader and Cub Scout den mother.Â She was an incredible stay-at-home-mom to her two children, who benefitted greatly.Â  Donna was Development Director for Girl Scouts of Eastern Oklahoma in Tulsa, OK.Â Â  Prior to that, she served in fundraising capacities at several nonprofits in the Tulsa metro area.Â This included Hospice of Green Country, Red Cross Tulsa Area Chapter, Twelve in Twelve Treatment Center, Mental Health Association of Oklahoma and the Gatesway Foundation.Â In 2009 she was awarded the Association of Fundraising Professionals (AFP) award.Â This award symbolized the respect she had earned in the nonprofit community to which she had dedicated her professional life.Â Â  As Hospice of Green Country stated on their Facebook page: It is with heavy hearts we remember one of our own this week.Â Donna Stidham was Hospice of Green Countryâ??s Development Director for 7 years.Â Well known in the Tulsa Community, Donna raised approximately $7-million for area nonprofits over a 20-year career, giving tirelessly to HGC, Girl Scouts of Eastern Oklahoma, Gatesway Foundation, Mental Health Association of Oklahoma and Tulsa Area Red Cross.Â Thanks to her leadership, the Eastern Oklahoma Chapter of the AFP won the award for the highest three-year growth for a chapter of its size group.Â  Beyond the many accomplishments in the workplace, we will remember Donna for her spirit of kindness, her compassion for humanity, her quest for justice and equality, her love for her family and friends, her laugh, her style, her presence.Â We will miss her terribly, and we join countless others in grieving the loss of such a light in our world.Â — Thank you, Donna, for always shining your light so brightly so that we could learn to walk on the path. Donna is survived by: Â·Â Â Â Â Â Â Â Â  Â Her husband, Charles Stidham of Jenks, OK. Â·Â Â Â Â Â Â Â Â  Her father and mother, John and Wanda Spencer of Overland Park, KS. Â·Â Â Â Â Â Â Â Â  Her sister, Karen Randall with husband Dan Randall of Kansas City, MO. Â·Â Â Â Â Â Â Â Â  Her daughter, Angela Evans with husband Ed Evans and their children Matt Evans with wife Charlie Evans, with child Cayde Evans,Â and Brooke Evans of Broken Arrow, OK.Â  Â·Â Â Â Â Â Â Â Â  Her son, Matt Montgomery with wife Tisha Montgomery of Rogers, AR, and their children Brittany Shaddox with husband Brandon Shaddox, of Fayetteville, AR, and Madison Montgomery of Rogers, AR. Â Â  Â·Â Â Â Â Â Â Â Â  Her step son, Rick Stidham with wife Suzanne Stidham of Phoenix, AZ, and their child Dylon MacEachran with husband Hugh MacEachran and child, Declan MacEachran, of Loveland, CO.Â  Â·Â Â Â Â Â Â Â Â  Her step son, James Stidham with wife Asako of Kamakura, Japan. Â·Â Â Â Â Â Â Â Â  Her step daughter, Sheryl Fritts with husband Mike Fritts and their children Ava Fritts and Tara Fritts of Tulsa, OK. Â·Â Â Â Â Â Â Â Â  Her step daughter, Lisa Saldana with husband Daniel Saldana and their children Ryan Saldana, Tyler Saldana and Kyle Saldana of Frisco, TX. Â  Â  Pallbearers: Matt Montgomery (son), Matt Evans (grandson), Madison Montgomery (grandson), Scott McLoed (nephew), Ed Evans (son-in-law) and Mike Fritts (son-in-law)

Donna Mae (Montgomery) Stidham was adored by all her family friends, coworkers and acquaintances.Â She loved and treated everyone like family.Â She brought out the best in everyone she touched and was the voice of reason who modeled kindness,... View Obituary & Service Information

The family of Donna Mae Stidham created this Life Tributes page to make it easy to share your memories.

Donna Mae (Montgomery) Stidham was adored by all her family friends,...