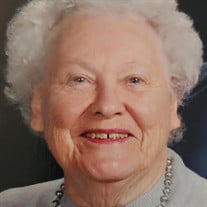 Doris Jane Bruin, 96, passed away in Tulsa, Oklahoma on April 11, 2021. She was a loving mother, grandmother and great grandmother at the time of her passing. Doris was born to Laura and Hendley (Hank) Hoge on March 23, 1925 in Chicago, Illinois. After graduating from Morgan Park High School, she pursued further education at the University of Illinois. Doris met her husband, Jack Bruin (Sapulpa, OK) at the University of Illinois. They were blessed with three daughters, Marilyn Jo and twins, Karin Lee and Diane Marie. They called Batavia, Illinois home until Jack was transferred to Ames, Iowa. She was an active member of her Ames community and enjoyed being employed in the registrars office at Iowa State University. She was an avid, life-long Iowa State University football and basketball fan. Dorie and Jack spent their retirement years as members of The Wally Byam Airstream Club, traveling the country with a close group of Iowa friends and discovering a love for their “second home” in Mesa, Arizona. Oklahoma called Jack and Dorie back to his childhood home and they enjoyed their later retirement years in Tulsa. Jack and Dorie journeyed together in marriage for sixty-six years before his death in 2014. She was preceded in death by her parents, Laura and Hendley Hoge, her husband, Jack and her daughter, Karin Bruin. She is survived by her daughters, Marilyn Bruin and Diane Lang (Chris), her grandchildren, Joel Biggs (Nicole), Lisa Ceballos (Juan), Justin Biggs, Kathryn Lang (Greg Taylor) and Jaime Lang (Scott Fleagle). She is also survived by five great-grandchildren with two great-grandchildren on the way. Her brother Albert Hoge and sister, Carole Hesting, also survive. A memorial service for Dorie is scheduled for 11:00 am on Wednesday, April 14th at Asbury Methodist chapel, 6767 S Mingo Road, Tulsa, OK. She will be laid to rest beside her husband and daughter at Floral Haven Cemetery in Broken Arrow. Memorial contributions maybe sent to Asbury Methodist Church, Tulsa, OK. A memorial service for Doris will be held at 11 am on Wednesday April 14 at Asbury Methodist chapel.

Doris Jane Bruin, 96, passed away in Tulsa, Oklahoma on April 11, 2021. She was a loving mother, grandmother and great grandmother at the time of her passing. Doris was born to Laura and Hendley (Hank) Hoge on March 23, 1925 in Chicago, Illinois.... View Obituary & Service Information

The family of Doris Bruin created this Life Tributes page to make it easy to share your memories.

Doris Jane Bruin, 96, passed away in Tulsa, Oklahoma on April...

Send flowers to the Bruin family.