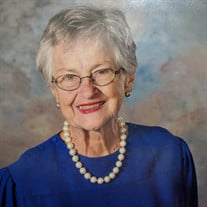 Doris Moser joined God’s heavenly choir on January 22, 2020. She is survived by her children Steven Moser (Renay) of Phoenix, Arizona, Martha Hernandez of San Antonio, Texas, and David Moser of Tulsa, Oklahoma, many beloved grandchildren, great-grandchildren, nieces and nephews. She was preceded in death by her parents, Richard and Martha Schweitzer, husband, Robert J. Moser; sister, Anna May Malinoski, grandson, Philip J. Hernandez, and son-in-law, Frank E. Hernandez. Doris Elsie Schweitzer was born April 25, 1929 in Woodbury, New Jersey, to German immigrants, Richard and Martha Schweitzer. Doris graduated from Pitman High School in 1946 and Franklin School of Science and Arts in Philadelphia in 1948. She worked as a medical secretary at the Jefferson Medical College of Philadelphia prior to marrying Robert James Moser (Bob) on August 23, 1952, at First Presbyterian Church in Pitman, New Jersey. They moved to Chicago, Illinois, so Bob could attend seminary while Doris worked in the medical field. Doris was a faithful Christian living out her life in various ways of serving others. Bob and Doris were active in several Presbyterian Churches over the course of Bob’s ministry. They started in 1954 at First Presbyterian Church in Rogers, Arkansas, were they made many dear friends and focused on serving the youth. Much to Doris’s chagrin (as it was so close to Christmas), they moved to Tulsa on December 12, 1959, to serve at College Hill Presbyterian Church for 21 years. During this time Doris spent most of her time raising her children, which included serving as a Camp Fire Girls leader, as well as participating as an active parent in multiple school functions. She also found time to volunteer at Hillcrest Hospital, sew, and garden. In 1981, Bob and Doris relocated to Wichita, Kansas, where they served at Grace Presbyterian Church for 10 years. Additionally, Doris volunteered at Wesley Hospital, worked part-time at Wichita State University, and was a member of the Quilter’s Guild. From 1990 to 1995, Doris tagged along with Bob, serving as an interim pastor to several churches, Good Shephard Presbyterian Church of Bartlesville, First Presbyterian Church of Sand Springs, Southminster Presbyterian Church of Tulsa, and First Presbyterian Church of Odessa, Texas. She found many ways to fill her days including a variety of handicrafts, volunteering, gardening and serving people wherever she could. When they returned to Tulsa in 1995, Doris joined Southminster Presbyterian Church where she became actively involved and found great joy working with The Malawi mission. She was able to participate in a worktrip to Malawi and made many special friends there. She continued her life of service and outreach in part by volunteering at St. John’s Hospital. Doris was most recently known as the “flower fairy” at Inverness Village Retirement Community. After gardening, she would leave cups of flowers at the doors of many of the residents to bright their days and share her love. In winter months, she would make treats to leave at their doors instead of flowers. Doris, who never met a stranger, enjoyed the community life of Inverness, and the many opportunities for friendship and service. Hearing from friends, both near and far, brought her great joy over the years. Doris will be remembered for her Christian spirit, generosity, forgiveness, and never-ending love. A memorial service will be held Saturday, February 1, 2020, at 2:00pm, at Southminster Presbyterian Church of Tulsa. Those wanting to honor Doris’s life may do so by making contributions to: Malawi Waterwells Project or Presbyterian Missions at Southminster Presbyterian Church, 3500 S. Peoria, Tulsa, OK 74105.

The family of Doris S. Moser created this Life Tributes page to make it easy to share your memories.

Send flowers to the Moser family.