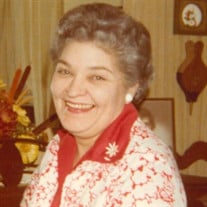 Doris Ann Clemons, of Tulsa, was born February 12, 1926 in Checotah, OK to Gladys Alta King Clemons and Luther Emmett Clemons. Doris wrote about her family living in Checotah in the 1930's and what a happy childhood she and her younger brother Robert had. The house on Oak Street had a clear view of the train tracks, was unpainted, they drew water from a well, washday was outside, and plumbing was an outhouse. They did not realize they lacked many material things, but knew they were rich in family. Her father was a carpenter and worked hard to support his family. Many times, he came home with a small grocery sack containing his day’s pay...a loaf of bread or a box of cereal. Sundays always found them in the First Baptist Church of Checotah. Toys and games were usually homemade or just made up. Clover chains, paper dolls cut from the Montgomery Ward catalog, jacks, and lightening bugs were favorites. On the radio, they listened to Inner Sanctum, Fred Allen, Joe Penner, Fibber McGee and Molly and boxing matches. It was a sad day when hearing the news that Will Rogers and Wiley Post were killed in a plane crash. Saturday was usually a big day because the family went downtown to Irma's Hamburger Stand and ate the best hamburgers ever with chocolate soda pop. Saturday movies were 10 cents. The first movie Doris ever saw was "Jessie James." Behind the City Park lived the big Haggard family. Was not one of the boy’s named Merle as in "Okie from Muskogee?" Guess he couldn't rhyme the name Checotah! Mrs. Niles was the local music teacher. Doris's mother cleaned her house once a week to pay for music lessons. This led to a lifelong joy of music as she played the organ and piano for many years. Somewhere along the way, the family got a Model T Ford, which was quite exciting. There were few trips, but one to remember was visiting Frank and Joanna Hinkle and cousins’ Burke and Buddy. The kids found some pink candy and ate it all. Soon it was discovered to be a laxative. Joanna was right when she said "What a mess!" Hoboes riding trains and gypsies frequently passed through town and her mother would always find something for them to eat. One summer, Checotah had a campaign to collect metal pots and pans. Doris gave her favorite mud pie pan thinking it was the patriotic thing to do. They would watch the trains pass loaded with scrap metal. Little did they know it was headed for Japan and would return one day as a bullet. Living in the small town ended for them in 1939. Carpenter work faded away in Checotah so the family followed their Daddy to Tulsa where there was more work. The first thing she noticed about Tulsa was the brightness of the streetlights. They lived in a basement apartment on South Detroit. They could walk to Kress’s, Woolworths and Newberry's. They later moved to Carbondale, where Doris attended Daniel Webster High School. She graduated in 1943 and soon after, began her career at Taylor Instruments where she worked for several years. She met Garrett Hyden Moss at a birthday party - he was the "boy next door". After serving in the Air Force during WWII, Garrett finally returned home. They married on July 30, 1949 and resided in Tulsa. They soon bought a home in Red Fork and had two sons, Garrett Jr, and Robert King. The family was very active in the Baptist church. Doris was a dedicated lifelong Christian and she lived by example. She was a very gifted woman and used her many talents to let the light of Jesus shine through her. She was a Sunday school teacher, active in WMU, played the piano, and was the Media Center director for 26 years at Red Fork Baptist Church. She was a true teacher and loved to give handmade crafts teaching about Jesus. She also loved to travel and the family went on long vacation trips every year throughout the United States. Later in life, she and Garrett went on church bus trips with lifelong church family friends. Glorieta in New Mexico and Ridgecrest Conference Center in North Carolina were favorite destinations. The family is thankful for the love and support of their many friends. Doris created many photo albums documenting the family’s travels and life experiences. She was also an artist and the family home was filled with her oil and pastel paintings. Doris wrote daily entries in a Journal beginning in 1958 until her death. She filled 37 journals. She has encouraged several people to journal their own personal stories. Even this past month, she helped motivate one of her nurses in Prairie House Assisted Living to start writing her own journal. We are grateful to the men and women at Prairie House Assisted Living and Rivercross Hospice for their dedication and loving care during the past few months. They truly have a heart for the Senior Community. Doris passed away August 17th, 2021 at her residence. She is now at peace with her heavenly Father, family and friends. Doris was preceded in death by her husband, Garrett Hyden Moss in 2013, daughter-in-law Margarita Moss, daughter-in-law Jan Moss, sister-in law Kathleen Clemons, and her parents Gladys and Luther Clemons. She is survived by two sons, Garrett H. Moss Jr. of Broken Arrow and Robert K. Moss and wife Joy of Grove, OK. Grandchildren Jennifer Moss and great grandson Liam of Tulsa, Stephen Moss and wife Lauren and great granddaughter Adley of Beggs. Brother Robert Clemons and niece Carol Clemons Watteau of Broken Arrow, OK. Graveside services will be held on Tuesday, August 24 at 11 am at Floral Haven Memorial Gardens- Masonic Garden.

Doris Ann Clemons, of Tulsa, was born February 12, 1926 in Checotah, OK to Gladys Alta King Clemons and Luther Emmett Clemons. Doris wrote about her family living in Checotah in the 1930's and what a happy childhood she and her younger brother... View Obituary & Service Information

The family of Doris Ann Moss created this Life Tributes page to make it easy to share your memories.

Send flowers to the Moss family.